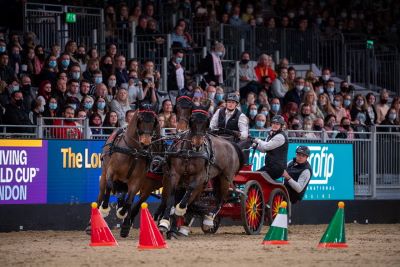 For the first time since 2008 the FEI Driving World Cup™ Final returns to Leipzig (GER) to round off the 2021-22 indoor season. The Driving will take place alongside the FEI World Cup™ Finals for Dressage, Jumping, and Vaulting.

Six of the world’s best international four-in-hand drivers will be vying to take the title in this enthralling event.  Requiring skill, agility, and bravery, teams of four powerful horses must work together as they are steered at the gallop through a combination of obstacles and pairs of cones, with many tight twists and turns.  Although competitors aim for the fastest time, they must also be accurate as penalties are added for any balls that are knocked off.  This event is a popular spectacle which engages the crowd, the electric atmosphere enhanced with rock music and theatrical lighting.

Reigning indoor and outdoor FEI Driving World Champion Boyd Exell (AUS) leads the rankings going into the final.  Winner of more Four-in-Hand World Championships than any other driver, Boyd first took the indoor World Cup title in 2009 in Gothenburg (SWE).  He admits it has been a difficult season, with the early events running so close to each other at the end of 2021, then a long wait until the final.  Having won three of the four qualifying events in Lyon, Stockholm, and then London just before Christmas, Boyd said, “We are keeping our teams, both horse and human, focussed and not taking anything for granted.  It would be a mistake to underestimate the competition.”

Course designer Jeroen Houterman (NED), who designed the tracks in Lyon and London, is keeping his course a secret until he gets to Leipzig.  Mindful of the lack of competition practice the horses have had going into the finals, he has created the sort of test he would produce at the beginning of a season, making it relatively simple.  He hopes his design will encourage flowing driving that is not too difficult on the horses and when walking the course, drivers should be able to see what their options are.

Competition will be fierce between these talented drivers, with both Koos and Bram being previous title holders, and the home crowd will be cheering loudest for Michael and Mareike, who has the accolade of being the first female to compete at the final.  Mareike had an excellent drive in London and finished in third place, which helped seal her place in Leipzig.

Due to the Covid-19 pandemic, there has not been an FEI World Cup™ Final since Bordeaux in February 2020, and this year the event is being held in April, which is later than usual.  However, the drivers, their horses, and the support teams around them are all highly experienced and will have altered their preparation to take this timing into account.

Driving Ground Jury President, Mark Wentein (BEL), said, “After the Covid-19 lockdowns and cancellation of some of the planned FEI World Cup qualifiers, the top drivers from the international driving scene are very keen to start in Leipzig for the final. Personally, I am convinced that the battle and the sporting standards will be very high. You have of course the World Champion and the title holder Boyd Exell (AUS), but perhaps some other drivers will put the pressure on his shoulders. Anyway, Leipzig will host the four different legs of FEI World Cup Finals and will be the most thrilling moment of the indoor season 2021-22. I expect great sportsmanship from all the competitors.”

Further information on the FEI Driving World Cup™ Final can be found here.