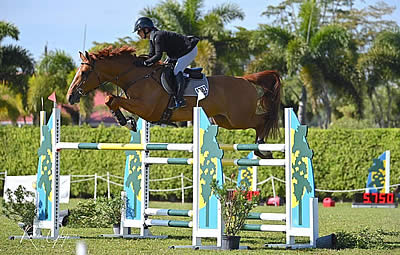 Wellington, FL (March 10, 2020) – Ashlee Bond’s 1-2 finish in Friday’s $15,000 Turf Tour Grand Prix was just a taste of excellence to be put forth by the Israeli rider during week 9. Making the most of the Turf Tour’s exceptional grass field set at To-Kalon Farm March 4-6, Bond bounded to first and second aboard Semilly F and Imagine, before going on to win the $401,000 Douglas Elliman Grand Prix CSI 5* on Saturday night with Donatello. Designed as a show for all levels of equestrians, the Turf Tour’s utopian atmosphere and gorgeous venues make it an ideal place to train, progress, and develop horse and rider relationships to their maximum potential.

“I love how you can go show at a different location weekly [on the Turf Tour] and go into different arenas in a beautiful and relaxed environment,” said Bond. “I think it’s really important to have shows like this as it is super beneficial for horses and riders to get in the ring without pressure. It’s also good for their minds. Training in a show environment is not something you get to do often enough like in Europe and I think it’s so important.”

Bond’s winning streak began during Turf Tour 8 @ Black Watch Farm, where she was victorious in that week’s $15,000 Turf Tour Grand Prix with Ace of Hearts. Going on to victory in Turf Tour 9’s Grand Prix, she finished on a jump off time of 37.004 with Semilly F. Aboard Imagine, a mare she began riding as a 6-year-old, the pair made their 1.40m show debut on Friday with a double clear and second place effort in a time less than a second behind Semilly F’s: 37.057 seconds. Third went to Irishman Riley Mackillop and Amigo, coming home in the jump-off on a time of 37.687, while fourth went to the USA’s Lauren Hough and Gemino, putting in a double clear and jump off time of 39.475.

Turf Tour 9’s courses at beautiful To-Kalon Farm, referred to as Wellington’s Napa Valley, were set by Olympic course designer Leopoldo Palacios, and featured a number of tests for both horse and rider. In the Grand Prix’s design, a triple bar followed immediately by two one-stride verticals tested the ability to collect and jump quickly after a wide-spanning oxer. Another challenge was a zig zag line featuring the Prestige Italia vertical, oxer to vertical double, and the bicycle skinny, a test of agility and athleticism. And finally, the last oxer in both the first round and the jump off was just a few inches wider than the other oxers in the field, requiring muscle memory override.