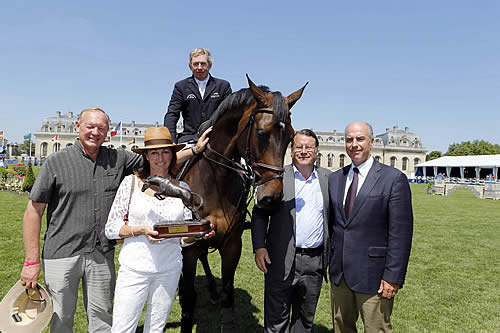 Lausanne (SUI), 23 July 2013 – Beverley Widdowson (GBR), owner of the 10-year-old bay stallion Big Star ridden by Olympic team gold medallist Nick Skelton, has been awarded the prestigious title of FEI Owner of the Year for the second year running by the FEI and the Jumping Owners Club.

A year ago, Beverley Widdowson picked up the coveted owner’s prize with her 12-year-old grey gelding Carlo 273, ridden by Nick Skelton to double bronze at the FEI European Jumping Championships 2011 in Madrid (ESP), and which is now the new top horse of Sergio Alvarez Moya (ESP).

“To win this award for the second year running is an incredible feeling, and is testament to all the hard work of everyone on the team involved in the success of Big Star – I am over the moon,” said Beverley Widdowson. “Nick and Big Star have had some amazing wins so far this year. They’re both extremely focussed and doing their utmost – long may it continue!”

Beverley Widdowson was presented with the FEI Owner of the Year award at the eighth leg of the Longines Global Champions Tour in Chantilly (FRA) on 20 July by Christian Baillet (FRA), Chairman of the Jumping Owners Club, and John Madden (USA), FEI Executive Board member and FEI Jumping Committee Chair.

“To win the FEI Owner of the Year award more than once is a brilliant achievement, but to do so in consecutive years really takes some doing,” Christian Baillet said.

“Big Star and Nick Skelton are having a tremendous run of success. Since securing team gold at the London 2012 Olympic Games, they have had a steady stream of high profile wins, including the Grand Prix at the Piazza di Siena in Rome and at the World Equestrian Festival in Aachen – all eyes are on this incredible partnership as the season continues.”

The FEI Owner of the Year Award was created in 2004 to recognise the most successful Jumping owner on an annual basis. To determine the winner, a classification is established for all horse and rider combinations based on points from the world Jumping rankings – now called the Longines Rankings – during the calendar year.

The owner of the horse of the winning combination receives a bronze sculpture produced by Caroline Wallace.

The Jumping Owners Club was formed in 2005, and is an exclusive organisation of international owners, which works towards growing the popularity of the sport around the world. It is the only body which represents the views and opinions of the owners, and works closely with the Fédération Equestre Internationale (FEI) in building the profile and inclusiveness of Jumping.