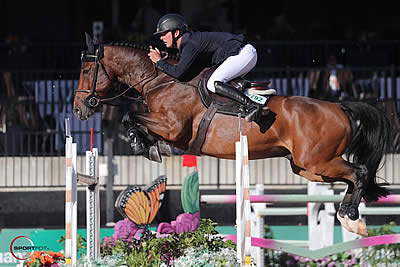 Course designer Guilherme Jorge (BRA) tested 66 entries over the first-round course, with 14 horse-and-rider pairs welcomed back to challenge the jump-off. Allen, who had already won Friday’s $36,000 Speed Stake CSI 5* aboard Lafayette Van Overis, admitted that he wasn’t really going for the win with his still-green and recently acquired ride:

“This is the first time he’s jumped as big as he did today [1.50m], so I already thought Friday was ‘my’ class, you know. In the first round it was the biggest and most difficult course he’s jumped, but he really put his head down and tried his best. For the jump-off, I wasn’t really watching everybody, because I didn’t want to do something crazy,” Allen revealed, “so I was actually quite relaxed going in. I just wanted to be as fast as I could be, and it worked out, and he’s naturally very fast as well.”

Allen and the 2011 Belgian Warmblood gelding (Kashmir Van Schuttershof x Tauber an Het Kapelhof) owned by Clee Equestrian & Harrie Theeuwes put in a smooth performance that couldn’t be topped in the end, but since he was so focused on giving Lafayette Van Overis a good ride, he couldn’t quite pinpoint where he won: “I’m not sure exactly where I made up the time, because I wasn’t really watching the others, so I’d have to watch it back, but actually everything just came up nice and smooth, for a change.

“It’s been a very good week,” said Allen. “I’ve placed every day, except in the Grand Prix I had an unlucky four faults, but other than that it’s been fantastic. The pressure’s off now – the trip’s paid for! It’s been a super week.”

From here, Allen isn’t sure how high Lafayette Van Overis will soar, but he’s happy with the willing attitude and work ethic he’s got at the start of their partnership: “I still don’t know how much scope he has in the end, but he’s so smart, and he totally only wants to do the right thing, and when you have one like that, it makes for a great start.”