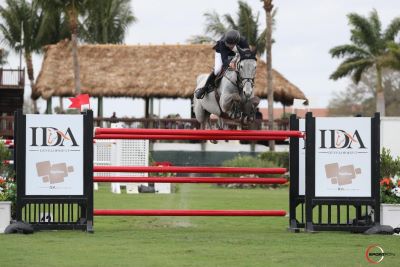 In the first round of Sunday’s grand prix, the final line on course featured a triple combination [vertical, oxer, vertical] followed by five strides down to the IDA Developments oxer, the final jump on course. This combination of jumps proved to be one of the most difficult sections of the track designed by Catsy Cruz (MEX). A starting field of 45 combinations challenged the course, with 18 qualifying to return for the jump-off.

Fresh off their victory in the Adequan® WEF Challenge Cup on Friday, Allen and the 11-year-old Irish Sport Horse gelding by Cassino x Lux Z did it again, putting forth a blistering double-clear effort to stop the clock in 37.10 seconds.

It was Sam Walker (CAN) and Marbill Hill Farm’s Coralissa who jumped to the top of the leaderboard after 63 horse-and-rider combinations took to the Derby Field in the $25,000 Hermès Under 25 Grand Prix on Sunday afternoon, with nine pairs returning to the jump-off round set by designer Catsy Cruz (MEX).

Walker and the 2010 Holsteiner mare by Com Air were one of two combinations to put in two fault-free rounds, finishing the short course in 43.89 seconds. “This past year with the pandemic, I pretty much took a full year off from competition,” said Walker. “To come back out here and do so well today, to feel her still in her prime, it really means a lot to me.”