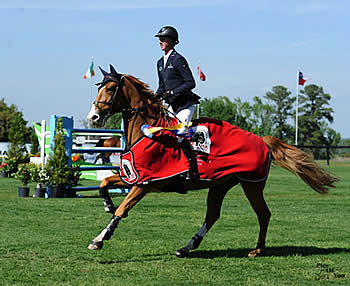 Ocala, FL (March 22, 2014) – It only took 42.48 fault-free seconds for Ben Maher of Great Britain to prove why he is show jumping’s reigning Olympic Individual Gold medalist as he boldly negotiated Jane Clark’s Aristo Z over Leopoldo Palacio’s eight-fence jump-off and, in front of a full house of spectators at its John Deere stadium, clinched this year’s $50,000 CSI2*W at the 2014 Live Oak International in Ocala, FL.

“It was a fantastic ride,” said Maher, who no sooner completed his victory gallop than was boarding a plane for a second grand prix in south Florida that evening at FTI Winter Equestrian Festival in Wellington.

“He stayed quiet and adjusted to the temperature,” Maher continued, referring to the exceptionally fine weather on Saturday.  “Chester (Weber) put on a great show and it was a pleasure to come.”

Second to Maher, but successfully clinching her berth for this year’s World Cup, was U.S. rider Ashlee Bond Clarke, who was also penalty-free in the jump off, on Little Valley Farm’s Agrostar, crossing the timers just three-tenths of a second behind Maher (42.73).

“I won’t lie; I was sweating,” said Clarke, 29.  “I’m not so young anymore.  I still feel twenty but today was stressful.  I knew if Jenni (McAllister, the first to go in the jump-off) went clear she could beat me for a place on the World Cup.  I had to be no worse than fifth.  Her rail made my life easier!”  McAllister set the pace in the jump off — 45.30 seconds – but also collected four faults.

Continuing the international caliber of the field was Angel Karoyli of Venezuela, who was third on Hollow Creek Farm’s Indiana 127.  Karoyli, who has been riding the chestnut KWPN gelding for just under two years, was no stranger to Palacios’ courses, and made an aggressive grab at the win only to find his nemesis going from Palacios’ wall into its grand prix plank fence.

“He has a tendency to drift a little to the left, but I over-adjusted,” said the 27-year-old show jumping star.

Watching the CSI2*W finale was its host, Chester Weber.  This is only the third year that grand prix show jumping has been added to Live Oak International’s 21-year tradition of equestrian competition, and Weber foresees the Ocala venue only broadening its worldview.

“I’d like to offer three-day eventing as well.  We’re exploring that. One day, I would like to see Live Oak International bring to Ocala the equivalent of Aachen,” said Weber, referring to one of Europe’s most time-honored equestrian sport venues.

Elite entertainment after the victory gallop continued with the Lugano Diamonds Competitor’s Party on Saturday night, which swapped the golden luster of Maher’s Olympic-level performance for the chic shimmering sparkle of diamonds amid a silver and white décor befitting its 007 James Bond theme.

The final day of the 2014 Live Oak International promises to deliver another show of precision and athleticism during the Driving Obstacle Competition beginning at 9 a.m.  A Coaching Presentation at 1:15pm will feature the history and tradition behind carriage driving, followed by a children’s Leadline Class at 1:30pm. The $33,000 CSI**W Hollow Creek Winning Round completes the week’s competition.

Admission is $10 at the gate for adults and $5 for seniors and children under 12. It is strongly recommended that spectators bring lawn chairs. Concessions and a Vendor Village will be open during the entire competition.

For more information on Live Oak International, including a full schedule of events, visit www.liveoakinternational.com.