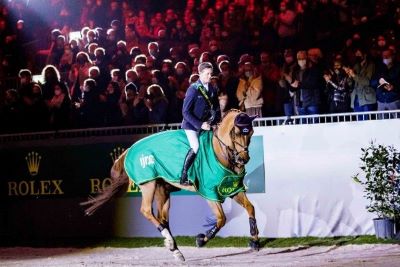 Ten of the world’s very best show jumping athletes battled it out in the headline class on day two of CHI Geneva 2021, with each partnership vying to be crowned Rolex IJRC Top 10 Final champion in the 20th edition of this epic encounter. Contested over two rounds, the Gérard Lachat- and Louis Konickx-designed course would be the ultimate test of horsemanship, requiring a perfect balance of speed, precision, and harmony between horse and rider.

First to go, Frenchman Kevin Staut and his 14-year-old mare, Tolede de Mescam Harcour, were unlucky to put one fence down. Next up, current world number eight Jérôme Guery and his stallion, Quel Homme de Hus, crossed the finish line fault-free, much to the delight of the Belgian. Great Britain’s Ben Maher and his superstar gelding Explosion W followed Guery’s lead, making no mistake around the 12-obstacle test. Then followed a procession of five riders, Henrik von Eckermann, Steve Guerdat, Scott Brash, Kent Farrington, and Martin Fuchs, who were all unable to record a clear round. The last two riders out of the 10 starters – Germany’s Daniel Deusser and Swede Peder Fredricson – showed their class, breezing the course with ease, each without a fault.

A slightly shortened second round, made up of nine obstacles, awaited the evening’s competitors. As well as the half-time break giving the volunteers an opportunity to modify the course, the Geneva Arena’s spectators were treated to some sad but celebratory words from legendary Canadian rider, Eric Lamaze, as his adored 18-year-old mare Fine Lady 5 was retired. Lamaze and Fine Lady won the Rolex IJRC Top 10 Final in 2016, so the setting for a final goodbye was very fitting.

First to go in round two, home favourite Martin Fuchs picked up another fault, while compatriot Steve Guerdat and partner Victorio Des Frotards were also unable to record a clear round. Rolex Grand Slam of Show Jumping champion, Scott Brash, made amends for his first round penalty and time fault, going clear, but accumulating a total of five penalties. 2017’s Rolex IJRC Top 10 Final champion, Kevin Staut and his stunning grey received a huge cheer from a delighted crowd after they went clear. Current world number one Peder Fredricson wasn’t to be so fortunate, picking up a second fault to finish on eight penalties. A stunning and assured round by Henrik von Eckermann and King Edward was enough to knock Staut off top spot. Uncharacteristically, Deusser’s mount Killer Queen VDM refused the second fence putting him out of contention. The penultimate pair to go, reigning Individual Olympic champion Ben Maher and Explosion W went brilliantly clear, beating von Eckermann into second place by nearly two seconds. All eyes were then on Jérôme Guery to cause a late upset; however, a fence down and a slower time saw him slot into third, meaning Maher would be crowned 2021’s Rolex IJRC Top 10 Final champion, rounding off a truly memorable year.

On the part that his team played in his victory, Maher commented: “My team plays a huge part. My owners are here to watch this evening, and without them I wouldn’t be able to be riding Explosion W over the last few years. My groom Cormac has been with me since he was 16 years old, so he’s grown up together with me, and it’s very special for me to see him take big moments like this, and it wouldn’t be possible without him.”