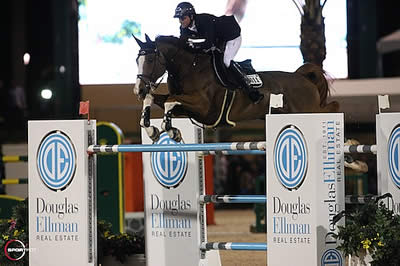 Alan Wade’s (IRL) course under the lights tested all of the horses and riders Saturday night, and only those three, out of the 41 starters, were able to advance to the jump-off. It took 17 rounds before Meredith Michaels-Beerbaum and Artemis Equestrian Farm LLC’s Fibonacci 17 were the first pair to jump clear in round one. Another 17 rounds, and Laura Kraut and Cherry Knoll Farm Inc.’s Cedric jumped the second clear to make a jump-off. Second to last, Ben Maher and Tatiana Korsakova’s Diva II put in the third clear trip. The three combinations returned to settle the final standings in one more round.

Michaels-Beerbaum and Fibonacci 17 were first to return, jumping clear over the short course in 46.31 seconds. Kraut and Cedric had one rail down in a slower time of 46.76 seconds. Maher and Diva II were last to go, clearing the course in 46.03 seconds for the win.

Watch Ben Maher and Diva II in their winning round!

Maher started riding Diva II, a 10-year-old Anglo European mare by (Kannan x Berlioz), in November of 2014 and finished out last year’s Winter Equestrian Festival with a 1.50m win in week eleven of the circuit. Diva has developed throughout the year and came back even better in 2015, stepping up to the bigger classes and proving her talent in Saturday’s challenging World Cup qualifying event.

Despite jumping at the end of the class and returning for the second round after only a brief break, the mare put in the extra effort.

“It was a pretty quick turnaround for me. I was second from the end, so Diva did not have much time to recover, which I really felt in the warm-up especially before the jump-off,” Maher stated. “That jump-off probably was not my best ever round. Diva is hairy in the way she goes. She is not so conventional always, but I did not have a lot to lose. A couple weeks ago I played it safe. Tonight I knew I would be top three, so I figured that I would have a go and with a little bit of luck here and there, it paid off.”

“She has come a long way this circuit. I had her this time last year and we built up,” Maher detailed. “I remember being in the medium schooling jumpers out in the back ring and still kicking out the back rails then. It is exciting for me. Obviously Jane Clark is a great owner of mine, and we have had a building circuit with her horses. This is nice for another owner in Tatiana Korsakova. This is the first horse that they have owned at this level and hopefully this will bring new partnerships into the sport and something good for the future.”

With the best win of Diva’s career, Maher noted that the mare also won a class in Olympia with Alan Wade building.

“He is a great course builder,” Maher stated. “When I walked, I thought it was quite a smooth course, but they were big jumps. I was right at the end to go and there were fences falling everywhere. There was not anything in particular that was the main cause of the problems. It is big money, so you expect a big course.”

“I’m very happy with my horse tonight because I think Cedric is one of the best horses in the world for a long time and Meredith’s horse is probably right there coming into its prime,” Maher added. “Diva could not have been in better company.”

After winning the $372,000 Suncast® CSI 5* Grand Prix two weeks ago, Michaels-Beerbaum was thrilled with another top finish for her talented mount, Fibonacci 17. The 10-year-old Swedish Warmblood gelding (For Feeling x Corland) has become a worldwide star since pairing up with the German rider and once again showed off his impressive jump under the lights.

“He felt great. He jumped the first round beautifully,” Michaels-Beerbaum expressed. “In the jump-off, I had a couple of things go wrong. I lost my stirrup after (jump) number two, which made me nervous because he jumps so high (that) I would not like to jump a fence without a stirrup. I made sure I got my stirrup back before the next fence, which takes a little time and then I had a slight slip going back to the oxer in front of the VIP, which he handled beautifully. These two little things cost you a couple tenths of a second.”

Michaels-Beerbaum also weighed in on the night’s course, agreeing that the degree of difficulty was appropriate for an important class.

“I think that it was a great course because you saw faults everywhere, which really shows the mastership of a great course designer, instead of having one thing that horses can’t jump,” she remarked. “There were very wide oxers and tall verticals tonight everywhere. I thought it was brilliant and I think at this level, it is a championship level, and it is good when it is tough. It is good when there are only a few horses that rise to the top and jump-off. I think it was a really exciting class, and we heard that from all sides.”

For Kraut, this top three finish with Cedric was emotional, as every moment with the 17-year-old gelding is cherished. A pint-sized Holsteiner by Chambertin x Carolus Z, Cedric gave it his all Saturday night and will now have a well-deserved break.

“I was saying to Meredith earlier, because she understands having had Shutterfly, that every time that horse puts in a performance like he did tonight it makes me want to cry,” Kraut acknowledged. “It is so emotional. He has such a big heart and tonight it was very, very difficult. I promised him earlier that if he was good tonight I would not make him do anymore this circuit and he could have a little break. He must have heard me. I want to thank Margaret Duprey for making it possible for me to have this horse until he is 17 and on. It is a blessing every time.”

Wrapping up a fantastic night of show jumping, Don Langdon, a Palm Beach Broker for Douglas Elliman Real Estate, expressed his company’s appreciation for the sport and its top competitors.

“I think if I was going to do a parlay, I would have picked Ben Maher to win early. It was breathtaking,” Langdon stated. “For the spectators, we were all holding our breath. I think that showed, and the riders rose to the challenge, which is great. Our company is so proud to be a part of what you are all doing. We sponsored the Hampton Classic for the last 12 years. This is the first run in Wellington, and it is a result of my relationship with Palm Beach Polo for the last 31 years. I hope it is a harbinger of things to come. It will take us to great heights together because we certainly love supporting the sport. Thank you for making us a part of it. Mark Bellissimo has been a great friend and a great supporter, and we are happy to be here.”

Despite a rainy afternoon, Tori Colvin and Dr. Betsee Parker’s Ovation stayed on point to finish the day as champions in the EnTrust Capital Small Junior Hunters 16-17. On the first day of competition, Colvin and Ovation topped both over fences classes and the under saddle. With the change in weather, Ovation was a little up the second day, but still won the first over fences class on his way to the tricolor ribbon. “He [Ovation] was a bit wild today. I trotted in and his head went up, but he was amazing yesterday, so it made up for today,” Colvin smiled.

Ailish Cunniffe rode Good Times, an entry of Jennifer Gates, to reserve championship honors. The pair remained consistent over both days, earning three seconds and a third over fences, along with a second in the under saddle.

No stranger to the winner’s circle, Colvin and Ovation turned in another stellar performance this week in the Small Junior Hunters. Colvin commented, “Friday was the best that he [Ovation] has ever gone.”

The highlight of the weekend was Ovation’s handy hunter round that earned a high score of 90. “I loved the handy yesterday,” Colvin started. “I did an inside turn that I was not planning on, which put me on a sharp angle, but it worked out.”

Although this is Colvin’s last year competing with Ovation before he retires, she is enjoying having a reliable winner. “He [Ovation] is an old man at this point. Once he is in the groove, he is very easy and straight-forward in the ring,” Colvin explained.

After WEF, Colvin will primarily show Ovation at the larger shows and looks forward to her last indoors season with him. As for Colvin’s own career, she plans to compete in both the jumpers and hunters after she ages out of the juniors. “I want to keep doing the hunters, but the jumpers are really fun!” Colvin exclaimed.

Week nine concludes on Sunday with the $85,000 Suncast® 1.50m Championship Jumper Classic beginning at approximately 10:00 a.m. The class will be live streamed at http://bit.ly/18QxRVj. WEF 9 hunter coverage concludes with the Karina Brez Jewelry Adult Amateur 36-49 Section B in the Rost Arena. For full results and more information, please visit www.pbiec.com.