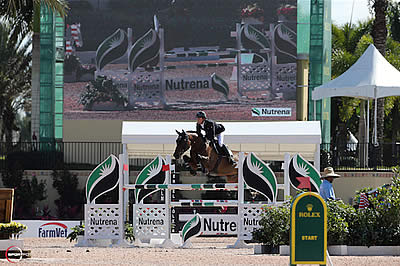 Wellington, FL – February 25, 2015 – The 2015 Winter Equestrian Festival (WEF) got underway with its eighth week of competition on Wednesday with a win for Great Britain’s Ben Maher and Contigo in the $25,000 Nutrena Jumper Classic. CSIO competition also kicked off with wins for Victoria Chiappero (ARG) with Grama Solitario and Adam Prudent (FRA) with Vasco in the $5,000 Wellington Equestrian Realty Welcome Stake, held in separate day and evening sessions.

Anthony D’Ambrosio (USA) is the course designer in the International Arena for week eight. D’Ambrosio began the week with 48 entries in the $25,000 Nutrena Jumper Classic with a 15-horse jump-off and six double clear rounds. Olympic team gold medalists Ben Maher (GBR) and McLain Ward (USA) each qualified two mounts for the tiebreaker.

Paul O’Shea (IRL) and Michael Hayden’s Primo de Revel were first to jump-off and finished fifth overall with a time 45.05 seconds. Maher and his first mount, Wyndmont’s Valinski S, were next to clear the short course in 43.57 seconds to eventually place fourth. Andrew Ramsay (USA) jumped the next clear round in 42.48 seconds to take the second place prize with his own Winn Winn. One round later, Maher returned with his second mount, Contigo, to complete the winning round in 42.37 seconds.

Tim Gredley (GBR) jumped into third with his time of 43.16 seconds aboard Unex Competition Yard’s Handyman, and McLain Ward completed the final clear round with Double H Farm’s HH Azur in 49.04 seconds to finish sixth. Ward also had the fastest time of the day in 41.20 seconds aboard Double H Farm’s HH Ashley, but a rail at the final fence in the jump-off put the pair in eighth place.

“He came to us when he was five. He was bought for the owner’s son to ride and he has been studying a lot in college, so we have brought the horse along,” Maher explained. “He is a nice horse. This is the first time that he has probably jumped this level and gone this quick, and he coped absolutely fine.”

Maher went first with Valinski S, who is a new mount for him this winter. He aimed for a nice, clear round with Valinski and was then able to increase his speed on Contigo.

“It was hard to know how the jump-off was going to go and then he (Valinski S) jumped the first couple of jumps not quite as quick as I would have hoped,” Maher detailed “I just kept the round neat. We are hoping to produce him for bigger things in the next couple of weeks, and I am still getting to know him.”

“Obviously I could gauge my time with Contigo a bit more and know where I could take some risks,” Maher continued. “I wasn’t sure whether to jump a steady clear because he is inexperienced, or try. He felt good, so I took a very tight turn back to the Sotheby’s fence and then left a stride out to the last oxer, which is probably the first time he has ever seen a stride like that at speed to that high of a jump. There may have been an element of shock, but he jumped it great and I am happy to finally get a win here at WEF.”

Maher was also pleased to have Contigo’s owner in the crowd for his first big win of the 2015 WEF circuit.

“This was the first time his owner saw him in about three years actually. She flew over here to watch him, so she can come more often!” Maher laughed. “He will probably go back to the farm and be put out in the paddock and come back out next week or the week after. We will slowly produce him up to the 1.50m and maybe the WEF class on a Thursday.”

Also showing on Wednesday, CSIO competition got underway with a $5,000 Welcome Stake, sponsored by Wellington Equestrian Realty, which was held in two sessions. The win in the day session went to Argentina’s Victoria Chiaperro aboard Grama Solitario. The night session saw a win for France’s Adam Prudent with Patrick Flin and Plain Bay Sales’ Vasco.

Competition continues on Thursday with the $34,000 Ruby et Violette WEF Challenge Cup featured in the International Arena in the morning. The Perfect Products Pre-Green Hunter 3’3″ will award championship honors in Ring 6. For full results and more information, please visit www.pbiec.com.