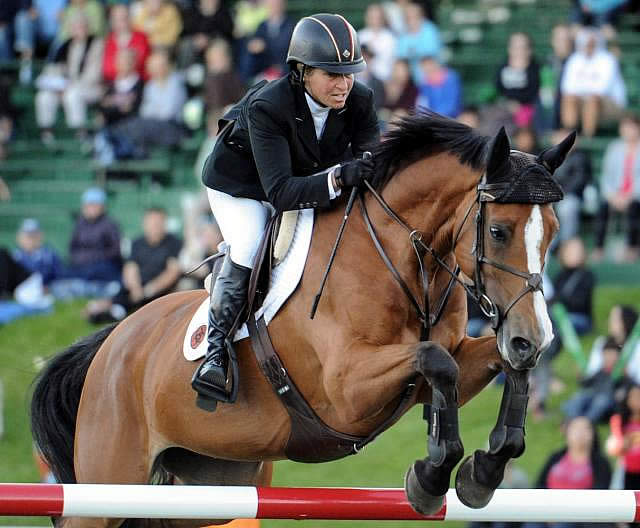 Calgary, AB – June 7, 2013 – Beezie Madden led the victory gallop in both competitions in the International Ring today. In the $35,000 RBC Capital Markets Cup 1.50m, she and Amadora found the path to win. The $35,000 ATCO Energy Solutions Cup 1.45m had a field of 62 competitors, and it was Madden and Wrigley who were fastest in the jump-off. Fifteen-year-old Lucas Porter rode Phineas to victory in the $10,000 Mercer Junior/Amateur 1.40m.

The $35,000 RBC Capital Markets Cup 1.50m was the feature event and was held in the winning round format. The top 25 placed horses from the Enbridge Cup on Wednesday qualified for today’s competition. From the top 25, the top eight returned to compete over a shortened course to determine the winner.

Madden and Amadora, a 10-year-old Dutch Warmblood mare by Chin Chin x Indoctro owned by Abigail Wexner, were clear in the jump-off and able to set the winning time at 42.18 seconds, despite adding a stride to the last jump.

“For sure to the last fence I got a little Edward Scissorhands-ish there!” Madden laughed. “I thought I was going pretty good until after the double combination. I could have been a little faster to the coin (jump) and for sure a lot faster to the last.”

Second place went to Enrique Gonzalez (MEX) on Quilebo D Tillard, who were also clear in 43.79 seconds. Meagan Nusz (USA) and Dynamo, owned by Amalaya Investments, were third in a time of 49.47 seconds.

Madden is second in the All-Time Money Won List at Spruce Meadows, and her two wins today have helped inch her toward first place, currently held by Canadian Olympic gold medalist Eric Lamaze. Madden won this class last year with another mount, Mademoiselle.

Amadora has been in the Maddens’ barn since she was five years old, and it has taken time to get the “sensitive” mare on a consistently winning track. “We knew she always had a lot of quality. She’s been a little bit of a project,” Madden described. “Although she’s very nice to ride, she actually has a lot of blood and a bit of a fight in her. When that fight went in the right direction, we knew we’d have a good horse. It’s been an up and down road, but she’s starting to get more consistent now. We can count on her.”

Enrique Gonzalez had an unfortunate fall outside the ring before the awards ceremony, so he was unable to attend the press conference.

Meagan Nusz was there and spoke about her plan going into the jump-off. “I knew the few before me had rails and I knew who was coming behind me. I thought if I could just put in a good, clean round, that would be good for me. This is only my second year to show in the International Ring. My main strategy was just to stay clean.”

Nusz has ridden Dynamo for almost three years and said when she brought him to Spruce Meadows last year for the first time, he “grew into himself.” She explained, “He was a completely different horse. He loves the grass, he loves Spruce Meadows, he loves the ribbon presentations, everything about it, which is great for me. He jumps awesome here and gives me a lot of confidence.”

Nusz will continue to show at Spruce Meadows before traveling to Europe, where she will represent the United States at the Furusiyya FEI Nations Cup in Bratislava, Slovakia.

The $35,000 ATCO Energy Solutions Cup 1.45m had the largest starting field of the day with 62 entries, and 10 qualified for the jump-off. Leading the pack with a time of 38.72 seconds was Olympic gold medalist and 2013 FEI World Cup Finals winner Beezie Madden on Wrigley, a 10-year-old Dutch Warmblood mare by Padinus x Burggaaf owned by John Madden Sales, Inc.

Second place went to Jonathan McCrea (USA) and Twisther, owned by Candy Tribble, who had a jump-off time of 39.27 seconds. Katie Dinan (USA) and Grant Road Partners’ Glory Days were third in 39.61 seconds.

Madden said of the track, “It was a tough enough course with the time allowed factor. You needed a little speed in the first round. The jump-off, I didn’t see anybody go, but my husband told me it was quite fast. I just tried to go as fast as I could. I think I was pretty fast from the triple bar to the double (combination), and then I was really fast over to the coin jump.”

While Madden just got the ride on Wrigley this year, she knows the mare quite well; former student Callie Schott used to ride the grey mare for her and husband John Madden’s business, John Madden Sales. She described, “Wrigley started very late in her career. She’s had two foals, I think. She wasn’t even broke to ride until she was five years old. She is a little green for what she’s done, but she’s game.”

She went on to say, “She’s brave and careful. She’s a naturally fast horse too; she covers the ground pretty quick. You can run her and she stays careful. She has a funny mouth, but she’s not really strong. Like I can not be afraid to run her over to the coin jump and she’s going to slow down when I stop pushing. That’s always a nice feeling.”

Madden said it was nice to win already, and she feels good about showing Simon in tomorrow’s $400,000 CN Reliability Grand Prix CSI-W 5*. The ‘National’ is their first competition back after they won the FEI World Cup Finals in April.

In his biggest win yet at Spruce Meadows, 15-year-old Lucas Porter of Bartonville, TX, raced through the jump-off on Phineas, an 11-year-old Oldenburg gelding by Lamentos x Quattro B owned by Sleepy P Ranch LLC, to win the $10,000 Mercer Junior/Amateur-Owner 1.40m. He beat 27 entries in the competition and six others in the jump-off for victory in 38.943 seconds.

Beatriz Franco Sol (MEX) and Melody de la Fosse set the early pace in 39.085 seconds, which would hold up for second place. Third place went to Catherine Tyree (USA) and Don’t Go, who stopped the timers in 39.573 seconds.

Porter recounted, “I knew Beatriz who was leading did nine (strides) from (fences) one to two, which was a turn. With his stride, I could do a fast eight (strides). That’s where I made up my time. Other than that, I basically matched her. She was so fast.”

Porter “inherited” Phineas from his older brother Wilton, who rode him for two years. Porter and the bay gelding started together in the Low Junior Jumpers and moved up the 1.40m level. They were selected for the U.S. team at the FEI Junior Nations Cup in Wellington this past March.

“He’s just been awesome,” Porter described. “He’s extremely careful, really fast, and he has a little bit of a short stride, but that makes the lines quick. I can do quick adds. He sometimes gets a little spooky, but you just have to ride him through it and he gets over it. Once he’s in the ring, he goes into a different mindset and is all focus.”

Porter credited his trainer John Roche for his biggest win at Spruce Meadows in the three years he’s been coming here. “He’s been an amazing help. I’ve won a couple times, but not as big of a class as this one. It’s pretty amazing. I didn’t actually think I was quick enough in the jump-off, but I guess my kick through the last really did it.”

The ‘National’ Tournament CSI-W 5* continues tomorrow with the highlight event of the week, the $400,000 CN Reliability Grand Prix, CSI-W 5* at 2 pm. Also held in the International Ring will be the $60,000 Transcanada Parcours de Chasse 1.45m Speed. For more information on Spruce Meadows and full results, please visit www.sprucemeadows.com.

What Can You Do at Spruce Meadows?

Spruce Meadows includes affordable fun for the whole family. With admission starting at only $5 per person, and children (12 & under) and seniors (65 & up) free, it is the perfect venue to unwind and enjoy a day of show jumping, activities, delicious food, and shopping.

From Friday through Sunday, there will be a number of activities for the whole family (all included in your admission to Spruce Meadows) such as Pony Rides, presented by Kozy Shack, the Spruce Meadows Prairie Dogs, presented by RE/MAX, Wagon Rides, Face Painting, children’s games in the Garden Court Restaurant and more! Delicious food is offered throughout the grounds, featuring a healthy menu at the Garden Court Restaurant, a wide range of options at the Time Faults Public House, and International Fare in the Plaza.

Looking to test your luck? Spruce Meadows has several contest options for those wanting to win excellent prizes, including the Jump to It contest, with a chance to win a full set of jumps, the CN/Sun Media Name the Foal contest, and the Win a Year contest, with a chance to win a year of access to all Spruce Meadows events. If you are looking for some retail therapy, vendors in the Gallery on the Green and Vendor Village offer an excellent variety of gifts and services, both equine and non-equine in nature.