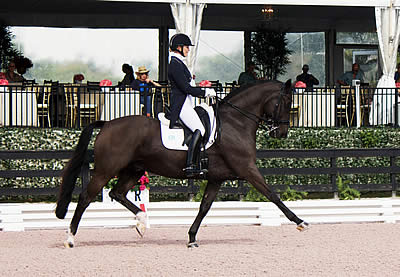 The Hartpury Festival of Dressage, held in Hartpury, England on July 6-10, was Bateson-Chandler’s last competition before going on to represent The Dutta Corp. U.S. Dressage Team in the upcoming FEI Nations Cup competition at the World Equestrian Festival CHIO Aachen.

“I was really happy with Alcazar in the LeMieux Grand Prix,” Bateson-Chandler stated. “I tested him a bit by not letting him see the arena beforehand, so I knew he would be a bit more nervous, but I wanted to know he could handle the situation.”

Not only did Alcazar, a 10-year-old KWPN (Contango x Polin, Ferro) gelding, handle the situation, but rose to the occasion by challenging some of the host nation’s top contenders. Bateson-Chandler and Alcazar travel to Europe each summer to train with Hester, where they are stabled at his yard with fellow competitor Dujardin.

“He was really great. Carl [Hester] and I have been changing some things up in his training, so I wanted to see if I could achieve some of the training changes in a test environment. We still had a couple of smaller mistakes, but the feeling in general was lovely! It’s so nice to be able to compete with my friends Carl and Charlotte as there is so much support from everyone here!”

Now Bateson-Chandler and Alcazar are fully geared up for the CHIO Aachen Nations Cup – the Final FEI Nations Cup competition for the 2016 year – which runs July 12-17 in Aachen, Germany. Bateson-Chandler said, “It will be great to be able to ride in that amazing stadium in Aachen! It is most riders’ dream to compete there, so I am thrilled that my first time riding at this facility will be on Alcazar. We are so looking forward to it!”

Bateson-Chandler and Alcazar train with both U.S. Olympian and Developing Dressage Coach Debbie McDonald while in Wellington, Florida during the winter. When not competing on the international stage, Bateson-Chandler offers training and coaching services through her business KBC Dressage. Her worldwide Grand Prix experience ensures that her students – both human and equine – have the competitive edge necessary for success in the dressage ring. KBC Dressage offers training, lessons, clinics, and prospect selection for clients. For more information about Katherine Bateson-Chandler, visit www.kbcdressage.com.