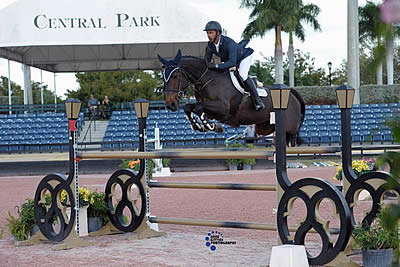 Wellington, FL – November 6, 2018 – Pablo Barrios of Wellington, FL and Elano 22 rode home with blue in the $25,000 Osphos® Grand Prix to wrap up Fall competition in the 2018 ESP Fall Finale at Palm Beach International Equestrian Center (PBIEC). Barrios and Elano 22, his own 2009 Dutch Warmblood mare (Harley VDL x Almox Prints), raced through the jump-off in 40.473 seconds to take the lead as the fastest four-fault finish. Jumping in close behind the pair was Marilyn Little of Frederick, MD and RF Casablanca, a 2010 Holsteiner mare (Cosido x Landos) owned by Raylyn Farms, Inc., who claimed second place with a jump-off time of 41.027 seconds on four faults. Derek Petersen of Archer, FL came in third aboard his own, Diamant’s Legacy, a 2009 Oldenburg stallion (Diamant de Semilly x Couleur-Rubin), also accumulating four faults with a time of 42.919 seconds.

Of the 31 competitors to test the course, designed by Hector Loyola of Wellington, FL, eight combinations advanced to the jump-off. “It was a good class. I went first so I was just trying to go as fast as possible in the jump-off with the other eight other riders behind me. I guess I was a little bit lucky that nobody went clear in the jump-off and I ended up winning the class,” Barrios commented.

“It was a new ride for me. I have only been back here for the last seven months. She came from a rest from the summer and she felt really good. Now we will start warming up for circuit. She is a really good mare and I have a lot of hope for her, especially for the winter. I am looking forward to more competitions with her,” concluded Barrios.