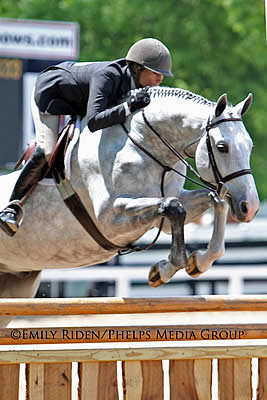 Jumpers on Hold Due to Weather

Lexington, KY – May 14, 2014 – Today marked the beginning of the Kentucky Spring Classic and an impressive start to the spring show season for Caroline Moran’s Bacardi. With Havens Schatt in the irons, the gray gelding earned consecutive scores of 92 for back-to-back wins in the Second Year Green Hunters at the Kentucky Horse Park.

While one would never guess it after watching his rounds today, the Kentucky Spring Classic marked Bacardi’s first return to the show ring after more than a month off and an unusual winter in Florida.

“While we were in Florida, he developed allergies to Melaleuca trees,” Schatt explained. “That was really a pain. During Week IV [of the Winter Equestrian Festival (WEF)], I was riding him to the ring for the warm-up and some leaves hit him in the face. He just started sneezing and shaking and trying to get to the fence to rub his nose.”

Schatt continued, “He just wasn’t himself. We had him tested for allergies, and we found out that that’s what it was. He was a little bit better by the end of WEF; he’d started on allergy shots, but I’ve just tried to keep his workload kind of light so that he could get through the round of shots. It’s a pretty long process.”

While it has been particularly light as of recent, a limited workload is the general approach that Schatt takes with Bacardi, and given their continuous successes it is an approach that is working out well. “When we go in the ring, I kind of feel like I’m winging it, but so far it’s working,” Schatt said. “To ride a horse like him is truly an honor. I don’t know that I’ve ever had a horse that goes in the ring trying to do his best every time and can act like that at home.”

With their two first place finishes, Schatt and Bacardi sit as the clear front runners heading in to day two of professional hunter competition in the Stonelea Ring. Christopher Payne and Channing and Jennifer Smith and As Always follow them closely, as both pairs turned in impressive performances over the Bobby Murphy designed courses to each earn a second place finish in today’s two over fences classes.

In the High Performance Hunter division, it is Scott Stewart and Everly and Kelley Farmer and Mindful who sit tied at the top heading in to tomorrow. Both horses received identical scores of 93 and 90, with Stewart and Everly taking the 93 and the top call in the first class and Farmer and Mindful topping the field with the 93 in the second class.

Similarly to Bacardi, Everly has enjoyed several months off after last showing during Week VI of WEF, and the mare, owned by Dr. Betsee Parker, returned to the ring today at the top of her game.

“She’s such a great jumper and such a great horse that we’re really able to just pick and choose what shows we do,” Stewart said. “I think today was the best she’s ever gone for me really. She was just very relaxed. I was really thrilled.”

Everly’s performances today bodes well leading up to week when she and Stewart will head to the Devon Horse Show.  “We like to come here before Devon,” Stewart said. “There’s so much space here to ride, and I think the horses are relaxed. It’s a new, change of venue for them after being in Florida. There’s good footing, and the courses were great today.”

Jumpers on Hold Due to Weather

This afternoon in the Rolex Stadium, the 1.40m Open Jumper speed class was the highlight event. Twenty-eight riders showed over Michel Vaillancourt’s track, before the class had to be stopped due to strong storms in the area. The leader before the class was put on hold was Emanuel Andrade and AD Vangelys, owned by Hollow Creek Farm of Aiken, SC.

The pace to beat was set early by Pablo Barrios and Hollow Creek Farm’s Crossfire 10 at a clear 60.834 seconds, but Andrade followed two rounds later. Andrade and AD Vangelys sliced the turns, and the pair was able to cross the finish line in a speedy 58.871 seconds to take over the lead. The only other rider to come close to Andrade’s time was Juan Ortiz and Korkade, who finished in 60.519 seconds.

There were still 13 riders set to return, and they will have the chance to try and catch Andrade’s time tomorrow morning at 8 a.m. The 1.45m Open Jumper class was moved to Thursday afternoon. For an updated schedule, please visit www.kentuckyhorseshows.com.

Tomorrow afternoon’s main event will be the $25,000 Hagyard Lexington Classic. Riders will also have the opportunity to showcase their mounts during Saturday evening’s $75,000 Mary Rena Murphy Grand Prix, sponsored by Audi of Lexington. The hunter riders will return to the Stonelea Arena tomorrow for the conclusion of the professional hunter divisions, and on Saturday evening they will vie for the winning honors in the $5,000 Hallway Feeds USHJA National Hunter Derby.