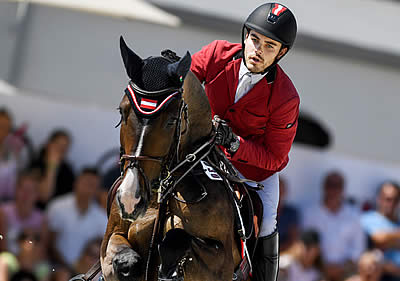 Team Austria earned promotion to Division 1 next season with a definitive victory at the Longines FEI Jumping Nations Cup™ of Hungary in Budapest (HUN). And they’ll join their Hungarian hosts at the Longines 2018 World Final in Barcelona (ESP) in eight weeks’ time, as the top two teams in this Europe Division 2 decider are entitled to contest the lucrative annual clash of champions.

Three clears in the first round gave the Austrians the early edge and they didn’t flinch to finish on a zero scoreline. It was a superb weekend for anchorman Max Kuhner (44).

All the more creditable was the fact that his Nations Cup horse is just an eight-year-old, the lovely bay gelding securing one of those pivotal foot-perfect runs in the opening round. It was Christian Rhomberg (27) who led the way for the winning side with an eight-fault result from Saphyr des Lacs, but when Julia Houtzager-Kayser (44) and rising star Felix Koller (21) made no mistake, then Kuhner wrapped up the early advantage.

However, the Hungarians were in hot pursuit as round two got underway, sharing a four-fault tally with Portugal and the Czech Republic while Norway was next in line carrying nine. The Norwegian side was almost a completely Gulliksen-family affair with son and daughter, Victoria and Johan-Sebastian, joining their father Geir along with Lisa Ulven. And they just missed the cut to the Barcelona Final when completing with 13 faults, only one point behind Hungary at the end of the day. Portugal finished fourth while Czech Republic had to settle for fifth ahead of Poland, Greece and the three-man Bulgarian team who brought up the rear.

The course designed by Germany’s Werner Deeg had some difficult lines as Houtzager-Kayser explained. “The water to the double at fences six and seven, and the line from the triple bar to the vertical and the oxer from eight to ten – none of that was easy!” she pointed out. However, she was well-pleased when her 14-year-old stallion Sterrehof’s Cayetano Z racked up an impressive double-clear, the only other coming from the 11-year-old Captain Future 3 ridden by team-mate Koller.

This young man, who has been based with the legendary Paul Schockemohle in Germany for the last six months, claimed individual Young Rider bronze at the Longines FEI European Championships in Fontainebleau (FRA) four weeks ago and looks to have a big future ahead of him.

“This was my first 5-Star Nations Cup and my horse was amazing; he is owned by my Austrian sponsor and he always gives his heart to me whenever we go in the ring!” — Felix Koller (AUT)

The prospect of fielding a team at the Longines 2018 Final in a few weeks’ time and of competing in Europe Division one next year all seemed quite overwhelming because Austria has a limited number of horses and riders at the top end of the sport. “Christian and Max will be competing at the World Equestrian Games in Tryon so we may have to find different horses for Barcelona, but this is so exciting – I can hardly believe it!” Koller said.