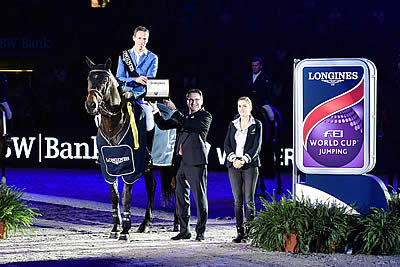 Stuttgart (GER), 22 November 2015 – Christian Ahlmann and Codex One secured a home nation victory at the fifth leg of the Longines FEI World Cup™ Jumping 2015/2016 Western European League in Stuttgart, Germany today. In a classic five-way jump-off, the 40-year-old rider and his 13-year-old stallion crushed the opposition with a devastating turn of speed when second-last to go against the clock, and Ahlmann has now moved up to third place on the Western European League leaderboard ahead of the sixth leg of the series in Madrid, Spain next Sunday.

Sweden’s Douglas Lindelow set the jump-off target time and held on for runner-up spot ahead of Germany’s Patrick Stuhlmeyer in third, while Ireland’s Cameron Hanley lined up fourth. Frenchman, Patrice Delaveau, had to settle for fifth place when his jump-off round didn’t go to plan, but his compatriots – Simon Delestre and Penelope Leprevost – continue to head the league table as the qualifying series moves towards the half-way stage.

An intriguing course designed by Belgium’s Luc Musette initially seemed a little lenient when two of the first three riders jumped clear. But there was a sting in the tail here, with the final line of fences taking a heavy toll as the competition evolved. A very narrow vertical at fence three was the undoing of many, while the triple combination at fence seven also clocked up plenty of faults, but it was the negotiation of the water-tray oxer three from home and the decision whether to go on four or five strides to the following double of verticals that proved decisive, with many also losing their line and balance to the last if they ran into problems here.

Amongst the starting field of 39 there were many superstars of the sport, but the list of first-round retirements included a number of them. World and European double-gold medallist, Jeroen Dubbeldam, called it a day with the 10-year-old Classic Man V, a relative newcomer to this level of the sport, while three-time FEI World Cup™ Jumping champions Meredith Michaels-Beerbaum and Marcus Ehning from Germany also retired. Michaels-Beerbaum’s grey, the spectacular Fibonacci, was clearly not firing on all cylinders while Ehning’s Singular LS La Silla was also not on form. And although the home crowd was spellbound when Michael Jung, the unchallenged supremo of the sport of Eventing, set off with Sportsmann S, there excitement was short-lived as the pair pulled up after a mistake at the oxer fence four.

The veteran John Whitaker was one of three denied a place in the timed round when exceeding the 73-seconds time limit in an otherwise foot-perfect run with the 10-year-old mare Ornellaia but the British legend secured some valuable points towards the Final when securing sixth spot before the jump-off got underway.

And it was a hot one from the outset, with Lindelow’s 12-year-old chestnut gelding’s deceptive pace bringing the Swedish pair home in 51.02 seconds which would prove a tough time to beat.

Musette presented them with an unusually long jump-off track of nine fences and 10 jumping efforts that asked for dare-devil turns and blistering speed in order to be in with a shot. Ireland’s Hanley showed he is right back in the game when winning yesterday’s Winning Round with Antello Z, but he was more than a second adrift when breaking the beam with Z Acodate DDL today and while Patrick Stuhlmeyer and Lacan posted 52.03 to go ahead of the Irish duo, the German pair was still more than a second behind the Swedish leaders.

Ahlmann, however, threw caution to the wind, his figure-of-eight turns through the new oxer at fence 18 to the two remaining elements of the triple combination and on to the vertical at fence eight shaving off valuable fractions of seconds and his gallop to the penultimate oxer at fence 10 and to the final vertical left the crowd screaming with delight. The clock showed 49.78 seconds and now only the flying Frenchman, Patrice Delaveau, could spoil a big German party. But while it all fell into place for Ahlmann, the fences just didn’t come up right for Delaveau and when Lacrimoso kicked the bricks out of the wall, formerly the first and now the third obstacle on the course, he wisely retired.

Gave it his all

Ahlmann said afterwards that he gave it his all against the clock. “I thought I could do it, but I had to try everything – I was really focused on being fast enough and I took every risk from jump to jump – it worked really well from the start to the finish! I saw exactly what Douglas did and I knew I couldn’t take fewer strides, so I just needed to take tighter turns and to go a bit faster,” he explained.

He was delighted with Codex One who had a relatively quiet summer season. “We did the Nations Cup in Rotterdam and I tried for the European Championships but we didn’t make it, so I gave him some time to rest,” said the man whose massive haul of career medals includes double-gold at the 2003 FEI European Championship in Donaueschingen (GER) in 2003 and the FEI World Cup™ Jumping title which he won on home turf in Leipzig in 2011 with Taloubet Z.

Codex One returned to action at Brussels (BEL) in September and was in the ribbons in Munich (GER) two weeks ago, so the rider knew he was coming back to his best. “He’ll have a week off now and then I’ll take him to either Paris or Geneva – I’m planning one more show for him before the end of the year but I’m in a lucky situation because I have a few Grand Prix horses I can take to shows right now which is very nice, so I’ll be keeping busy myself, going to Madrid, Paris, Geneva and Mechelen,” said Ahlmann who added, “and I really want to qualify for the Final in Gothenburg.”

Ahlmann has enjoyed a brilliant week at Stuttgart, winning two cars in the process, and as the post-competition press conference was winding up this evening, he was asked how he intends to get the two of them home to Belgium. “I don’t know,” he replied with a grin, “but I’m looking forward to solving the problem!” He will have no shortage of transport options for getting to Gothenburg for the Longines FEI World Cup™ Jumping Final which will take place in the Swedish city from 23 to 28 March 2016.

The next leg of the series will take place in Madrid, Spain on Sunday 29 November. For details, go to www.madridhorseweek.com or contact Press Officer Alejandra Cámara, a.camara@madridhorseweek.com, +34 609 915 944.

The Schleyer Halle in Stuttgart, Germany was the venue for the fifth leg of the Longines FEI World Cup™ Jumping 2015/2016 Western European League today.

The winning rider was Germany’s Christian Ahlmann partnering the 13-year-old Codex One.

5 horse-and-rider combinations qualified for the second-round jump-off against the clock.

The youngest horse in the competition was the 8-year-old grey stallion Chardonnay 79, ridden by Austria’s Max Kuhner.

The time-allowed in the first round was 73 seconds and 3 riders picked up just a single time penalty – John Whitaker (GBR), Max Kuhner (AUT) and Cedric Angot (FRA).

Christian Ahlmann (GER) 1st, talking about the last line of fences in the first round of today’s competition: “It was big, but not difficult in distance – it was a long four or short five strides (from fence 11 to 12), but it was at the end of course so horses were not that fresh any more. If they had a problem there they had to deal with the situation and quite often they didn’t succeed.”

Event Director Gotthilf Riexinger: “It was a fantastic competition and a perfect course from Luc Musette because it wasn’t easy but every fence caused problems, so it was a very balanced track.”

Douglas Lindelow (SWE) 2nd: “I was happy with both my rounds today; I’m really hoping make it to the Final in Gothenburg in March. This was my first time to compete here in Stuttgart and it’s a great show.”

Patrick Stuhymeyer (GER) 3rd: “My horse jumped great – he’s not the fastest horse so for him the jump-off course was difficult but I’m still very happy with his performance.”

John Roche, FEI Jumping Director: “Congratulations to the riders and the course designer, and thanks to the Organising Committee who have once again shown that Stuttgart is one of the gems in the Longines Western European League.”

Christian Ahlmann (GER) 1st: “I must say all week my horses were amazing. Today’s jump-off was very fast but my horse was very concentrated. Congratulations to Luc Musette for his course that was very technical but not too big. Of course it’s easy to say that when you’ve won, but it’s the truth!”