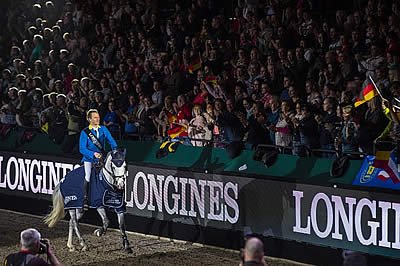 It’s long been one of his favourite venues, and Germany’s Christian Ahlmann had his home crowd in the palm of his hand once again when scorching to victory in the eleventh leg of the Longines FEI Jumping World Cup™ 2018/2019 Western European League at Leipzig.

Just three weeks ago, the man who currently holds 17th spot in the world rankings clinched a thrilling last-to-go victory in Mechelen (BEL) with the spectacular nine-year-old Clintrexo to shoot up the series leaderboard. Here it was another grey stallion, the 12-year-old Caribis Z, that carried him into pole position when last into the seven-horse jump-off, and he now stands top of the Western European League table with just two qualifying legs left to run.

Belgium’s Francois Mathy Jr (Uno de la Roque) and Italy’s Lorenzo de Luca (Armitages Boy) produced the only other double-clears to finish second and third, while Ahlmann’s compatriot, Daniel Deusser, posted the quickest round against the clock with Tobago, but had to settle for fourth with an unlucky fence down.

Ahlmann’s record at Leipzig is quite something. This was his seventh win at the fixture which celebrates its 22nd anniversary this year, and it was here that he steered Taloubet Z to claim the FEI World Cup™ Jumping title back in 2011. It was also here that he retired that great stallion after their final and emotional winning performance 12 months ago. It holds a very special place in his heart.

“This has always been an amazing show for me, and for my horses!” Ahlmann said as the fixture celebrated a record attendance of 74,700 spectators throughout the weekend.

German course designer, Frank Rothenberger, was determined he wouldn’t have a repeat of what happened in the last two Longines qualifiers at Leipzig Exhibition Centre. In 2018 a total of 15 went into the jump-off, and in 2017 there were 16 horse-and-rider combinations racing against the clock. However, a relentlessly testing first-round track, and a tidy time-allowed of 72 seconds, ensured there were just seven battling it out in the closing stages.

The Netherlands’ Leopold van Asten and VDL Groep Beauty led the way with a fence down in 40.83 seconds, and when Germany’s Tobias Meyer tried a very tight inside turn to the third, he paid the price when Queentina slammed on the brakes. Third to go, Mathy Jr, set a strong target when breaking the beam with a clean round in 41.49 seconds.

Deusser crossed the line in 39.53 seconds but left the same fence as van Asten, the planks at fence five, on the floor and although de Luca was foot-perfect, his time of 42.19 left Mathy still out in front with just two left to go. The crowd gasped when home hero and three-time Longines FEI Jumping World Cup™ champion Marcus Ehning kicked out the first before steaming around the rest of the track with the fearless Comme Il Faut, so Ahlmann knew exactly what he had to do, and Caribis Z made it look very easy when cruising through the finish in the winning time of 40.70 seconds to a massive roar of approval from the packed stadium.

“Caribis jumped very, very well – the course really suited him; the short distances were good for me so that was our luck today!” Ahlmann said.

“He’s always been a bit in the shadow of Taloubet and Codex, but he’s taken a huge step forward over the last season and he’s ready for big things now. He jumps really light and he’s very quick in a jump-off; he’s a very sporty horse!” he said of the stallion he knows well, because they’ve been a partnership for the last five years.

Ahlmann said he is unlikely compete at the last two Western European League qualifiers which will take place in Amsterdam (NED) next weekend and Bordeaux (FRA) two weeks later. But with a massive 72 qualifying points Christian Ahlmann can happily relax ahead of the Longines 2019 Final in Gothenburg, Sweden in April. “I have two horses in great shape at the moment, so I’m really looking forward to the Final now!” he added.