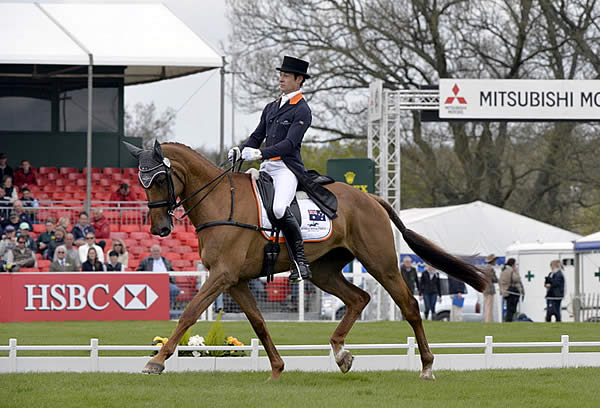 Lausanne (SUI), 3 May, 2013 – Two members of Australia’s 2012 Olympic team head the leaderboard after the first day of Dressage as anticipation builds at the Mitsubishi Motors Badminton Horse Trials (GBR), fourth leg of the HSBC FEI Classics.

Christopher Burton (AUS), who proved such a brilliant pathfinder when first out on the course at the London 2012 Olympic Games, scored 43.0 in Badminton’s atmospheric arena to lie a fraction of a penalty ahead of his compatriot, Sam Griffiths on Happy Times.

The pair are also old friends and 31-year-old Burton, who won the Adelaide CCI4* in 2008, was based with Griffiths and his wife Lucy when he first came to England two years ago.

Burton is well known as a talented showman in the Dressage arena. He said of his mount, Jean and Jade Findlay’s 17-year-old warmblood mare, Holstein Park Leilani: “Back at home in Australia, I said ‘this is a Badminton horse’, but I certainly didn’t expect to be in the lead here.

“She’s a lovely mare but not the most extravagant mover, so you have to really ride her. I’m thrilled because I was aiming to score under 45, and so to be in the lead on 43 feels incredible.”

In contrast, Griffiths and the 14-year-old Happy Times are old hands at Badminton, having finished third in 2009 and fourth in 2011. “He’s an experienced campaigner and he’s in good form,” Griffiths said.

“I hope his Dressage mark will hold up, because we’ve got some really good combinations coming up tomorrow, but it means I’m in a good place psychologically.”

This halfway stage of the HSBC FEI Classics season is an opportunity for other riders to get a foothold on the leaderboard, but the current leader Andrew Nicholson (NZL) shows no signs of relinquishing his commanding position without a fight.

He is currently in third place at Badminton on 45.0 on his Burghley winner, the crowd-pleasing grey Avebury, with his Pau winner Nereo to come tomorrow.

Both Nicholson and William Fox-Pitt (GBR), who are head to head in a thrilling battle for the Rolex Grand Slam this weekend, seem to be handling the intense media attention with equanimity.

“I’m not really thinking about the Grand Slam,” admitted Nicholson. “My main objective has always been to win Badminton and it’s been fixed in my mind since last year because I’ve got such a good string of horses at the moment. The Grand Slam is a bit of a dream, but I did go to Kentucky to put myself in contention for it. And, of course,” he laughed, “if I win Badminton, the Grand Slam will fall into place!”

Fox-Pitt is currently only 0.8 of a penalty adrift of Nicholson, in equal fourth place with Ireland’s Aoife Clark on Master Crusoe. His first ride, Oslo, winner of Pau as a precocious nine-year-old in 2011, is owned by a syndicate of 12 owners, the oldest of whom, Delia Cunningham, is 92.

“He’s good at dressage and he’s always on your side, but he can be a bit cheeky,” said Fox-Pitt of the French-bred gelding who spent last year side-lined with an injury.

Olympic champion Michael Jung (GER) made his Badminton debut on Leopin FST and is in sixth place on 46.5 after a customarily well-ridden performance. “It’s very nice to be here,” he said. “The Cross Country has good distances between fences where you can gallop – it’s very different from the Olympics!”

The defending Badminton champion, Sir Mark Todd (NZL), is only in 37th place with a mark of 67.8 on his first ride, Major Milestone, but he is not downhearted.  “He’s not built for dressage and he doesn’t enjoy it. We both just have to get through it because he’s a very good jumper. My ambition with him is to win the Glentrool Trophy! [for the rider who makes the greatest improvement on their Dressage score]”

The footing at Badminton is in perfect condition, and predictions are that quite a few riders will achieve the optimum time, but riders are regarding the fences with great respect.

Nicholson commented: “I thought it was a bit softer at the start until I had a second walk and I’ve realised there are some very tricky fences out there. At the Lake (fence 9), there is a big fence in and really quite difficult 120-degree turn. It’s a proper fence, as it should be at this level.

“The course is pretty decent all the way round. There’s open corners, the Mirage Pond (fence 14) is hard to judge because you’re not sure where you’re going to land, and at the Shogun Hollow (fence 18) there’s a long distance to the third box which will cause difficulty for horses that find it difficult to adjust their strides.”

Badminton has received unprecedented spectator interest this year, and ticket sales are about 10% up on last year, when the event had to be cancelled due to wet weather. There are 84 horses in the field representing 15 nations.

Director Hugh Thomas, who says his Cross Country course is “the strongest it’s been for a while”, said of the line-up: ”For those of us who have been involved in the sport for a long time, to have Fox-Pitt versus Nicholson versus Jung is a tasty dish. However, the reality is that there are actually about 15 combinations here who could win.”

FEI TV, the FEI’s official video website, will be LIVE for Cross Country (5 May) and Jumping (6 May) at Badminton – see start times on www.feitv.org/live.