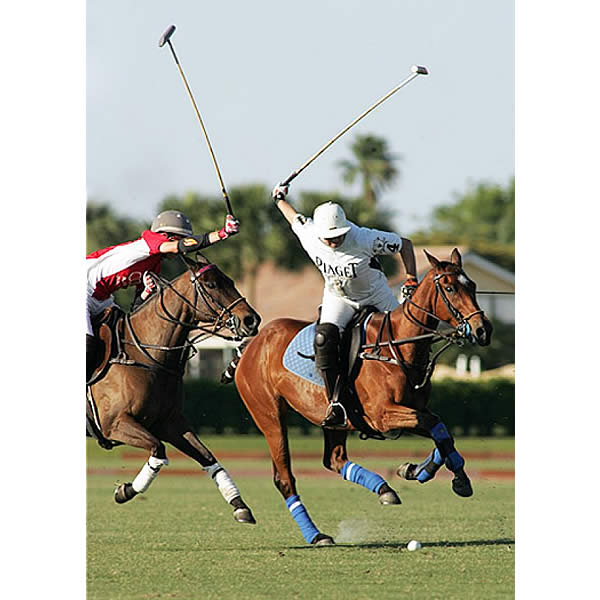 After six regulation chukkers and two nail-biting overtime minutes with the game still tied at 10-10, the championship final went to a shootout just before sunset.

“No pressure at all, none,” Ganzi said with a smile.

“This is totally the way to end the game, competitive and friendly,” Ganzi said. “This is what we are trying to accomplish here. Everyone knows everyone.

“You get to a point where we can’t play an eighth chukker,” Ganzi said. “We have played seven chukkers; there aren’t any more horses for an eighth so this was the fairest way to settle it.

Roldan and Lalor each scored four goals; Grant Ganzi added another goal and Audi picked up a handicap goal.

Piaget’s Juan Bollini, who led his team with four goals in the last three chukkers of regulation time, and returned to the game after getting whacked with a polo ball during sudden death, was named Most Valuable Player.

At the 1:17 mark of sudden death, Bollini was inadvertently hit on the shoulder blade by a Roldan rocket sending Bollini off his horse, writhing in pain on the field. He was attended to by medical personnel and his son, Juancito, while his pony rode off on the adjacent field before safely returning to a horse trailer.

It was Bollini who sparked his team’s rally and just missed scoring the game-winner in sudden death. Bollini’s back was wrapped with cellophane over an ice pack to reduce swelling and relieve the pain.

“I feel good; I will live,” Bollini said. “The final was really fun. It was a really tight game. Everybody had a chance to win it. It’s always competitive against Marc.”

Ganzi was not only thrilled with the victory but also the opportunity to play alongside his son.

“It’s good to play with him; he is learning at a rapid pace,” Ganzi said. “He has a lot of skill. Now he’s got to learn at this level with these guys that go this hard, the time and the space on the field. He can make every shot. He’s a great horseman and becoming a great polo player. Now he has to learn to play different speeds.

Ganzi, a freshman at St. Andrew’s School, played well throughout the two-day tournament and enjoyed being mentored by his father and other players including Roldan and Bollini.

“It was a crazy game,” Grant Ganzi said. “I’m really happy we won. It was a tough game. The second half we played really well. Penalty shots are not the way I wanted to end because overtime is always more fun.

“Of course, I am having fun and I am really pleased with the way I am playing. I want to get better and improve in the sport, and learn more and more. I want to play better polo and that’s what I am doing here.

“It’s always fun playing with my dad. It worked out well. Nic was very helpful, too. He helped me change something in the second half. I realized what he was saying and it helped a lot.”

Added Bollini, “Grant is playing well and that’s important to me. Grant is like my son and to see him improve in every single game is most important.”

The exciting day of polo featured nine chukkers of round robin play between Pony Express, Palm House and ELG and seven-chukker final.

In one of the most competitive spring circuits at Grand Champions, Audi is the third different champion in three tournaments. ELG/Psycho Bunny won the Palm City Open and Power Horse won the Polo Gear Invitational.

“It’s been very competitive,” Ganzi said. “Last year Pony Express won four out of five tournaments and this year they haven’t taken a trophy yet. The caliber of horses is getting better. The pros are competitive. Everything starts pretty friendly on Friday and then on Sunday everybody wants to win.”

The remaining Grand Champions spring tournaments are the May 10-12 USPA Sun Cup; May 17-19 USPA Eastern Challenge; and May 24-27 Memorial by Piaget.