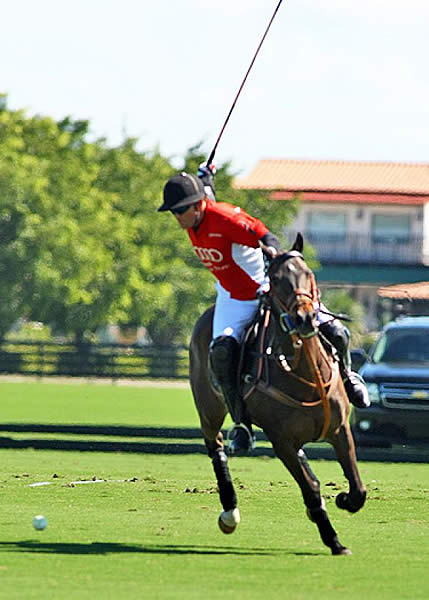 In the opening semifinal game at 1 p.m., Coca-Cola, 12-10 upset winners over Zacara, will play Lechuza Caracas, 10-7 winners over ERG.

Audi, down by four goals early in the game, came back in the second half to outscore Villa del Lago, 8-2.

“We are a second-half team, that’s all I can say,” said Nic Roldan, who scored a game-high eight goals. “We kept our cool.

Roldan is fourth among Ylvisaker Cup scoring leaders behind Facundo Pieres of Zacara (35), Miguel Astrada of Piaget (32) and Polito Pieres of Lechuza Caracas (28) with 27 goals including 17 on penalty shots.

Audi, one win away from the championship finals, will get a chance to avenge its lone loss of the tournament, a 10-9 decision to Lucchese on Feb. 1.

Last year Audi made it to the finals before being knocked off by Piaget.

“Lucchese was the team nobody wanted to play,” said Audi player-padrone Marc Ganzi. “They are four good players.

“The game changed very quickly,” Ganzi said. “It changed in the fourth and by the fifth we had them.

“It was a good game. They came out and put everything up front, they put their best horses up front. We’re a second half team. We’re clicking at the right time.”

Both teams had to contend with 45-degree weather and wind gusting up to 18 miles per hour.

After a slow start and falling behind in the third chukker (7-3), Audi was relentless in the second half with its total team effort and textbook defense.

After cutting Villa del Lago’s lead to two goals (7-5) to end the first half, Audi stormed back with a quick goal from Roldan to start the fourth chukker.

“For me the game changed with about three minutes left in the third chukker; we had a change in mentality,” Ganzi said. “The idea was to put more pressure on them so we started sending the ball forward.

“Once we started putting pressure on them to hit their backhanders, they were either hitting short backhanders or missing them and we were picking up their backhanders and scoring goals. We turned the tables on them right before halftime and that served notice that we were going to come and then we came with everything in the second half. We withstood the storm.”

Audi found its momentum, started pressuring more and began to chip away with goals, outscoring Villa del Lago, 3-1, in the fourth and fifth chukkers and shutting them out in the final chukker, 2-0.

“We are a second half team; we played well in the last three chukkers,” Pieres said. “We started playing really well in the fourth chukker.

“In the beginning it was too cold and there was a lot of wind,” Pieres said. “The balls were hitting the horses and everything. But in the second half we played much better as a team. We tried to play more short passes.

“They are a tough team; they have four good players and we knew that,” Pieres said. “It’s good we are in the semifinals. Now that we are playing well we want to win everything. It’s good for the team and good for the horses.”

The hard-fought game was physical. Each team was assessed a penalty one (automatic goal).

Mariano Gracida got knocked off his pony with 2:09 remaining in the fourth chukker but was unhurt and returned to the game. Roldan got hit in his lower back with a ball with 3:27 left in the sixth chukker.

Gracida, the son of former 10-goaler Carlos Gracida, will be making his 20-goal tournament semifinal debut on Wednesday.

“It feels great to be in the semifinals,” said the 19-year-old. “This is my first time. I am really happy how we played today.

“We switched a couple of things in the second half and got our rhythm started,” Gracida said. “We started making all the plays and finishing them. In the end we just clicked and everything went well.”

Gracida was well-mounted in the second half and covered the entire field making key defensive plays and stops while paying attention to details.

“Being on a better horse than your opponent is definitely an advantage,” Gracida said.