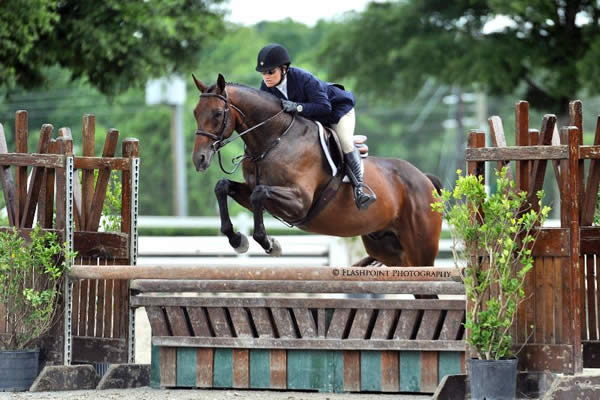 June 24, 2013 – The second week of the Atlanta Summer Classic wrapped up yesterday as thousands enjoyed beautiful weather, great competitions and clinics at the Georgia International Horse Park.  “We had a great two weeks. Even though our numbers were bigger than ever, the rings ran just as well and we all had a great time!” commented Classic Company President, Bob Bell.

The TAKE2 Thoroughbred Hunter and Jumper Divisions kicked off the week of competition on Wednesday and saw Frances Robinson of Ocala, Florida and her horse, Geoffery’s Mon, win the championship in the Take2 Thoroughbred Hunter Division.   Robinson was thrilled with her win and the program.  “This [Take2] is the greatest program ever – I have been in the Thoroughbred business as long as I’ve been alive.  Geoffery has done more for me than any other horse in both racing and riding,” commented Robinson.  “Back in the day, Thoroughbreds were it.  It’s so nice that this program offers them another chance.  There’s so much that we can still do.  Thoroughbreds want to work, want to please and want to do.  I work with Aaron Vale and he has done a remarkable job with this horse and helping me to get to the point where we are.  He’s a wonderful horse.”

Twenty-three tackled the $15,000 Welcome Class designed by Olympic Course Designer, Steve Stephens.  It was last Sunday’s grand prix winner, Alex Granato of Elizabeth, Colorado who won the class, this time aboard Mullaghdrin Rado, owned by Page Tredennick, with double clear rounds in 71.867 seconds and 32.693 seconds, respectively.  Jared Peterson of Archer, Florida took the second place spot in the irons of Titus 2:11, owned by Derek Peterson, after a clean first round time of 70.864 seconds and a second round of 32.875 seconds.  Third place was awarded to Samantha Senft of Wellington, Florida and her own Early Morning.  The pair went clean in the first round with a time of 69.256 seconds and turned in a clear second round in a time of 34.235 seconds.  For more results, click here: http://horseshowsonline.com/ClassResults.aspx.

The $35,000 Adequan Grand Prix Saturday night saw twenty-one horse and rider combinations take to the course designed by legendary Steve Stephens. Only two in the class went clean.  Samantha Senft of Wellington, Florida riding her own Early Morning was the second to go in the class and rode her first round in a time of 86.118, well within the 90 seconds time allowed.  Kyle Timm of Apex, North Carolina was next to go aboard Apex Equestrian Center’s Platinum, but with four jump faults, despite a time of 86.237 seconds, would have to settle for fifth place overall.  Derek Peterson of Archer, Florida was next to take the course with his own Via Dolorosa and finished with a total of eight faults and a time of 85.326 seconds, which would give them the ninth place overall.  Alex Granato of Elizabeth, Colorado, winner of last week’s $35,000 Outback Steakhouse Grand Prix took to the course aboard his own Mad Season, but with eight faults despite a time of 86.538 seconds, the pair would finish in tenth overall.

Three rounds later, Denise Wilson of Dousman, Wisconsin, riding Blue Gate Farm’s Bahrain 8, finished the course with eight jump faults in a time of 90.477 seconds resulting in an additional time fault, which placed the pair in twelfth overall.  Up and coming Grand Prix rider, Jordan Coyne of New Port Ritchey, Florida riding her own Lazaro, finished the course with 8 jump faults in a time of 90.007 seconds, resulting in one time fault which would place the pair in eleventh overall.  Granato returned for another go at the course, this time aboard Mullaghidren Rado, owned by Page Tredennick, and finished with 4 jump faults and one time fault with a time of 90.954 which landed the pair in eighth overall.  Just two trips later, Liza Finsness of Wellington, Florida, riding her own Ormsby Hill, went clean in a time of 89.423 seconds and ensured a jump-off round.

Two trips later, Paulo Santo of Wellington, Florida and Rafael Jose Contreras’ Florence A took to the course, but with four jump faults and one time fault in 90.858 seconds, the pair would finish in seventh.  Three trips later, Wilson returned to the ring, this time in the irons of her own Winter. Despite their time in 86. 983 seconds, their four jump faults would place them sixth overall.  Granato returned to the Olympic Stadium, this time with his own Gangsta and looked to join the jump-off, but with four jump faults despite a fast time of 79.330, the pair would have to settle for fourth.  Jared Peterson of Archer, Florida was last to go, aboard Derek Peterson’s Titus: 211.  Although the pair went clean, their time of 90.361 seconds would cost them one time fault and land them in third overall.

Senft and Early Morning were first to go in the jump-off and set the time to beat at 38.462 seconds.  Finsness and Hornsby Hill took to the ring and looked to beat Senft’s time and did so in 38.247 seconds, securing the win. “This was a very tough course,” commented Bell. “These riders and horses had to really ride for the money and they all did a great job,” he added.

In the meantime, the Classic Company is moving to the beach!  That’s right, surf and standards are the perfect combination for your family vacation.  Jump in the ring or jump the waves – you can do it both at the Charleston Summer Classics that kick off July 10.  And this year the Classic Company celebrates with back to back $25,000 grand prix classes.  Make sure to get your entries in now because this is the horse show and vacation destination the entire barn will enjoy.

Anyone who has shown with the Classic Company knows what sets them apart from the rest:  Classic Shows are FUN!  Complimentary exhibitor parties, luncheons, Saturday pizzas and the friendliest show management team anywhere work hard to make your showing experience the best.  Classic Company never charges an add or scratch fee for those last minute changes and there is no office fee added for credit card payments. For those who have not yet entered, go to the prize list or simply click on Equestrian Connect to fill out your entry form and stabling requests.