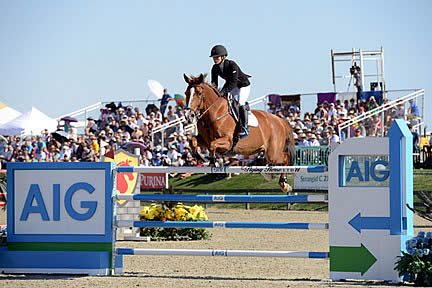 THERMAL, CA (March 16, 2014) – Ashlee Bond Clarke admits that she had to keep her nerves and her emotions in check when entering the ring for the jump-off of Sunday’s AIG $1 Million Grand Prix, presented by Lamborghini Newport Beach, at HITS Thermal. She was, however, a picture of poise and control to the crowd of 4,000 spectators that looked on as she topped a star-studded field to win the historic event with Little Valley Farms’ Chela LS.

“It still hasn’t sunk in,” she said. “This was the biggest track I have ridden on this mare, but she comes out every day wanting to win. It’s been all about finding that partnership for us and I think we have found it.”

Bond Clarke purchased the coming-10 chestnut mare from Simon Nizri in July and won the first grand prix of the season at HITS Thermal seven weeks ago. From there, Bond Clarke has seen the highs and lows with her scopey, yet opinionated mount. “She was really strong during the first World Cup week here and it took some time for us to figure it out and get the bridle right. We have been in the ribbons consistently since then,” said Bond Clarke.

Sunday’s order was a ‘who’s who’ of international show jumping with horse and rider accolades littering the list. The original order consisted of 39 riders who showed over a course designed by Marina Azevedo of Sao Paolo, Brazil. Fourteen obstacles and 17 jumping efforts made up the track, which boasted tall verticals, wide oxers and a formidable triple combination.

The course was really well-built,” said Bond Clarke of Azevedo’s work. “It was big, technical and scopey, but not unfair. There were faults everywhere and that’s the mark of a great course.”

Madden and Minikus both had a rail at the second-to-last fence of the shortened course – a tall vertical. East Coast hopes were not forsaken, however, as Kirsten Coe of Royal Palm Beach, Florida clocked a clear round in 46.86 seconds with Baronez, owned by Ilan Ferder, Lovsta Stuteri and Tal Milstein. “This course really suited my horse and my plan from the very beginning was to get a double clear and not try to ride faster than the speedsters behind me,” said Coe. “I just wanted to put some pressure and I did that – my horse performed great.”

The next clear round didn’t come until the last two trips of the jump-off when Nayel Nassar of Santa Clara, California and Bond Clarke gave the crowd a jump-off to remember. 2013 Zoetis Million victor and West Coast favorite, Nassar jumped his own Lordan to a clear round in 45.38 seconds with just Bond Clarke to follow. She put the speed of her big-strided mare to the test and crossed the timers in 41.16 seconds – more than three seconds faster than Nassar.

“Ashlee and I were joking about going one-two earlier in the week and if there’s anyone I don’t mind losing to, it’s her,” said Nassar who has jumped Lordan throughout the HITS Desert Circuit, but gave the gelding a break before the AIG Million. “I gave him the week off and didn’t even bring him to this part of the show grounds for about ten days, hoping the new jumps and the crowd would impress him today and they certainly did.”

A cross-country trip proved well worth the effort for Coe, Madden and Minikus as they took home their fair share of the prize money, rounding out the top five in third, fourth and fifth respectively.

After watching two West Coast riders jump to the top in Sunday’s money, HITS president and CEO Tom Struzzieri was pleased to see their efforts at HITS Thermal pay off. “To see the leading money winner of the circuit come out and win the big class was great,” he said. “It really validates this circuit – there were some pretty heavy hitters that came here from the east, but the West Coast stood their ground a produced great sport.”

Struzzieri said that the HITS Triple Crown of Show Jumping set out to do three things and it accomplished all of them today. “The sport was superb; we introduced show jumping to a lot of new fans and we satisfied one of the top equine sponsors in the world – AIG. I am really proud to be a part of it,” he concluded.

AIG, title sponsor of the AIG $1 Million Grand Prix, was represented by Vice President David Hubbard, who is based in Los Angeles and made a day of it at HITS Thermal. “I feel like I am among friends when I come out to watch this sport,” he said.

Hubbard gave the unofficial nod after the class that AIG is interested in returning to be a part of the million-dollar event next year. “It’s a privilege to be associated with HITS, these riders and this sport in general,” he said. “We are looking forward to doing it all again next year.”

The AIG $1 Million Grand Prix put the final exclamation point on the 2014 HITS Desert Circuit and as the sea of spectators headed home and prize money checks went to the bank, thoughts turned to next weekend. The Great American $1 Million Grand Prix will debut at HITS Ocala as the second jewel of the HITS Triple Crown of Show Jumping Monday, March 24. The million-dollar pilgrimage will now go east as riders, including Bond Clarke, set their sights on a chance to rewrite show jumping history.