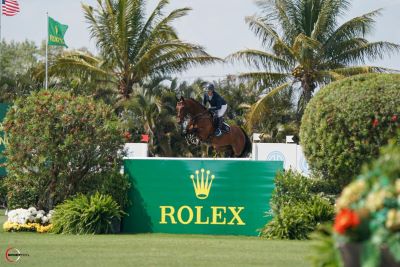 Wellington, FL – March 25, 2021 – An impressive group of international competitors took center stage on the grass Derby Field at Equestrian Village as Ashlee Bond (ISR) and Donatello 141, owned by Little Valley Farms, flew to the top of the $137,000 Adequan® WEF Challenge Cup Round 11 on Thursday, March 25, at the Winter Equestrian Festival (WEF).

A total of 56 combinations were represented in the starting order over a 1.55m course set by 2016 Olympic Games designer Guilherme Jorge (BRA) featuring 16 jumping efforts. With 22 pairs qualifying to return for the jump-off, the competition was fierce as 14 elected to return and battle for top spot in the grand prix qualifying class.

First to return in the subsequent round, Chloe Reid (USA) and Souper Shuttle set the pace for the remaining competitors as she piloted the 10-year-old Hanoverian mare by Stakkato x Luise Marie, owned by Live Oak Plantation, LLC, to a clear effort in a time of 41.66 seconds. Just two horses later, the lead changed as Ireland’s Cian O’Connor (IRL) and his mount Kilkenny, owned by Ronnoco Jump Ltd, produced an even quicker clear round in 41.12 seconds.

The Green Hunter 3’6” division, sponsored by Equine Tack and Nutritionals, wrapped up on Thursday in the E. R. Mische Grand Hunter Ring. Leading the class with 38 points, Scott Stewart piloted Rivers Edge’s Nottingham to the championship.

“Last week was his first time showing, and he was champion,” said Stewart. “And now he was champion again. He has just been great. He is usually so easygoing and looks through the bridle very well. You can just let go of the reins and gallop around.”