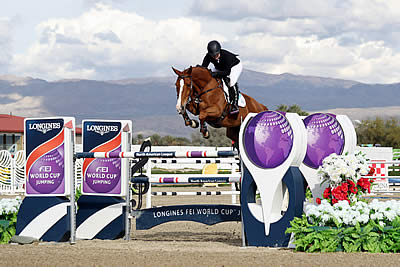 Thermal, California, USA, 12 February 2017 – Against a picturesque, California desert backdrop, the USA’s Ashlee Bond and Chela LS marked their official comeback to the top of world-class sport, claiming the victory with the only double clear in the $100,000 Longines FEI World Cup™ Jumping Thermal.

And while the slowly setting sun created the perfect golden haze for Bond’s return – from having her first child just four months ago – the challenging light could also be blamed for others’ course issues, including that of second-place finisher Audrey Coulter (USA) in the jump off. Shadows at the Longines oxer caused a miscommunication between Coulter and her horse Alex, forcing the fence down. The pair ended on four faults and a time of 45.29 seconds. Third place went to Lane Clark (USA) and Balu U with eight faults and a time of 40.10 seconds.

A technical course, designed by Brazil’s Marina Azevedo, met the day’s competitors. The first to go in the order, Bond showed the way without dropping a rail. She did originally accrue a single time penalty but soon after, the time allowed was extended from 75 seconds to 79.

In the four-man jump off, Bond once again rode first and delivered a smooth round that could not be caught. The California native’s performances aboard the chestnut mare reminded the crowd of their storied, longstanding record that includes a $1 Million Grand Prix win and a win in FEI Nations Cup™ competition in 2014.

“Chela was off for a year and a half with a staph infection in her hocks and just started coming back last August with my dad,” said Bond. “We both came back at the same time – it just worked out that way, luckily.

“I had a conversation with my dad and Richard Spooner before the jump off, and they both thought I should put in a nice, smooth round. I haven’t done so many jump offs lately so I just approached it with picking up a nice rhythm and being smooth.”

Other top West Coast names missed the final round with unlucky rails that dropped throughout the course. Field favorites Christian Heineking (GER), Eric Navet (FRA), and Jamie Barge (USA) earned four faults apiece. But arguably the most heartbreaking first round came from Mexico’s Daniel Pedraza, who missed advancing to the jump off by 1/100th of a second.

Marina Azevedo (Course Designer): “It’s always challenging to build for this group. It’s hard to build a qualifier for World Cup because we have rules to follow and always I try to be nice, but little bit strong and like the riders to learn a little bit when they jump my course so this is how I try to build the courses on the field.

“The World Cup, the riders thought were tough more than today. The problem I think, I like to prepare the horses to arrive today to ride better. I had today very high in spread fences. The line was not very complicated but I think just a month before the World Cup, you have to prepare the horses to arrive at the top level. I think my job is to arrive at the big competition at the best level. I think you have a good track and spread and height and different fences. We decided today to put more flowers to make the ring a little bit different so the horses jump a little bit different.”

Ashlee Bond (1st): “I’m very overwhelmed. I’m trying not to cry. It’s been a really long road with Chela. She’s been out for a year and a half, she’s almost died twice, she had a staph infection so to have her back is unbelievable. That’s probably why that’s so emotional – and having a baby four months ago, I’m feeling really out of shape and a little heavier than normal. Getting back in, I’ve been feeling really rusty up until actually yesterday I started to feel better. Then today, in the first round, I was like, ‘Okay, maybe I’m getting all the kinks out.’ So it’s just being in this field and being able to have a good day today was a really good feeling.

“I’m not really there yet to lay it down in a jump off so I had to go clear and go decently fast. I didn’t think I was going to win today. It worked out, it happens sometimes when you’re lucky but it was just building. I’m building. I’m getting my feet wet again.

“Having a baby puts everything into perspective. Show jumping was my entire life, and now it’s my daughter and my husband and my family and this is second. If anything, it takes a little bit of the pressure off. You realize what life is really about. Yes, this win means so much, but at the end of the day, if you have a rail but then you go home to your amazing family and it’s okay. I think in the end, it will help me to ride better, oddly enough. It’s been an amazing journey and I’m excited to have our daughter here. And hopefully by next year, she’ll be understanding this and it’ll be a joy if she wants to ride and do the ponies. I’m really looking forward to making it a family affair.”

Audrey Coulter (2nd): “My horse Alex is amazing. He is so dependable. He’s one you can bring anywhere, always goes in the ring, and tries his hardest to win and he did that today. He was so good.”

Lane Clark (3rd): “I have a great horse, Balu U. I’ve had him for about one year. He’s had one season of grand prix. He’s got some big things in his future. I really wanted to work on his jump off pace. I’ve only recently started going quick with him. I’ve only done a couple 1.60-meter with him. I just worry more about trying to leave out strides, try to worry about having it feel like a real jump off, and not worry too much about the results. I’m really happy with him.”