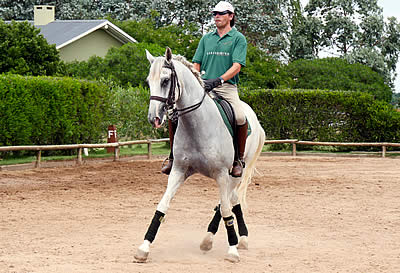 Jose Ignacio, Uruguay (February 11, 2017) – At the junction of performance and art lies Arte Ecuestre. Combining the unbounded beauty of South America’s eastern coast with an unbridled passion for the equine, this yearly celebration of the horse brings lifelong equestrians and newly discovered fanatics alike a spectacular exhibition of sport, culture, and entertainment. Presented January 12, 2017 by Zuercher Kantonalbank, Haras Godiva welcomed over 130 guests to the equestrian estate, which doubles as elite training center and stunning equestrian retreat.

The six acts of Arte Ecuestre correspond to the six disciplines presented in the performance: dressage, gaucho, driving, vaulting, jumping, and the Pas de Trois. With each act set to music and reflecting the diversity of equestrian sport, the grace and elegance of dressage to the heritage of the gaucho, the stars, of course, are the horses. For the dressage and driving acts, three Lusitano horses bred and owned by Interagro Lusitanos of Brazil epitomized the power, precision, and beauty inherent in these FEI disciplines. Trained and ridden by Mauricio Delucchi, Bailos Interagro and Desordeiro Interagro demonstrated dressage as a Freestyle and a Pas de Trois. Bailos Interagro, living up to his name, danced his way through the Grand Prix movements under the guidance of Delucchi, while Delucchi and Desordeiro, who is schooled through the Prix St. Georges, performed alongside Haras Godiva’s founder and owner Carolin Mallmann aboard Cesar Itapua and Paulina Morales with Capricho Itapua in a Pas de Trois set to the music of Strauss.

As a complement to the synchronized movements and elegance of the dressage, Argentine National Champion Carl Facht, with Josefina Frederick riding shotgun, piloted Zamorim Interagro through a thrilling demonstration of the obstacle phase of driving. Galloping through the elaborate course to the upbeat rhythm of techno, Zamorim’s agility and athleticism were highlighted by both Facht’s talented driving and the golden glow of the setting sun.

Uruguay’s Martin Rodriguez, a veteran the 2011 and 2015 Pan American Games and 2014 World Equestrian Games, showcased the discipline of showjumping with the P’Compadre Concalma, while Paulina Morales guided Sopresa through the bursts of speed and tight turns of the gaucho performance, a traditional display of South American horsemanship. Luciana Bidarte, Maria Eugenia Marmol, Marina Stapff, and Sofia Rabaquino presented the teamwork, rhythm, and athleticism of gymnastics on horseback, with Josefina Estavillo as coach and lunger, to round out Arte Ecuestre’s six acts.