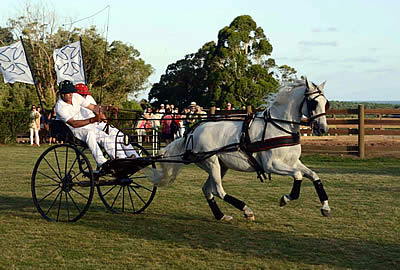 José Ignacio, Uruguay (February 20, 2016) – Against a backdrop of sweeping vistas and the Atlantic Ocean, a group of elite equines and their riders performed in a unique equestrian exhibition showcasing the beauty, diversity, and excitement of equestrian sport. The equestrian center and estate of Haras Godiva, and its owner Carolin Mallmann, have hosted the aptly named Arte Ecuestre for the past two years as an invitation only celebration of the horse through six equestrian presentations: a Gaucho exhibition, dressage exhibition, jumping exhibition, pas de deux, barrel racing, and a driving exhibition. An exceptional display of horsemanship and the athletic prowess of the equine, Arte Ecuestre acts as a catalyst to promote elite equestrian art through entertainment.

Held on January 13, 2016, Haras Godiva’s top horses and riders were selected to perform in each of the disciplines, and horses bred by Interagro Lusitanos were featured in both the dressage and driving portions of Arte Ecuestre. The dressage exhibition was presented by Mauricio Delucchi of Delucchi Dressage aboard Bailos Interagro (Noblíssimo Interagro x Dona (RC)) and Desordeiro Interagro (Perdigueiro (MAC) x Urzelina Interagro). Bailos Interagro, who is half-brother to the 2015 Working Equitation World Cup champion Xaveco Interagro, executed the Grand Prix movements under the guidance of Delucchi, while Desordeiro Interagro demonstrated Medium Level, which is equivalent to Third Level in the United States. Two other horses also performed a pas de deux, or ‘steps of two,’ a dressage freestyle featuring two horses and riders in a choreographed dance set to music. Zamorim Interagro (Quinarius Interagro x Mucuna Interagro), with Carl Fatch at the reins, performed a driving exhibition highlighting the precision, strength, and stamina required of driving horses. Fatch, who is the husband of Haras Godiva owner Carolin Mallmann, is an internationally renowned Argentinian driving champion, and Zamorim Interagro is half-brother to the successful Grand Prix dressage competitor, Zepelim Interagro.

Each of the 6 disciplines was well received by the 130 attendees, and following the exhibition, children and spectators were invited into the arena to get up close with the horses. Arte Ecuestre culminated in a cocktail hour and sunset celebration overlooking Haras Godiva’s stunning scenery. “The Arte Ecuestre is an important way for us to connect modern horse sport with the natural beauty of Uruguay and entertain our guests,” said Delucchi, who organizes the event with his wife, Paulina Morales. “The performances of Interagro’s horses are key for the exhibitions, as dressage and driving are very popular in South America and abroad. This year they were again very popular with our guests.”

Bred by Interagro Lusitanos of Itapira, Brazil, Zamorim, Bailos, and Desordeiro epitomize the qualities sought in the modern sport horse: athleticism, trainability, intelligence, and a willing temperament. With over 40 years of experience breeding, training, and exporting Lusitanos, Interagro’s mission is to preserve the exceptional bloodlines and qualities of the breed while showcasing their talent, beauty, and intelligence, especially in the FEI and sport horse disciplines. Established in 1975 by Dr. Paulo Gavião Gonzaga, Interagro’s initial vision was to preserve and restore the original foundational Lusitano bloodlines and lineages, many of which were in danger of extinction following the Portuguese Revolution of 1974. Through meticulous breeding, exceptional care, and world-class training, the Interagro Lusitanos of today continue that legacy as they compete across four continents.

For more information on Interagro, the stud farm, horses for sale, or the Lusitano bloodlines, visit the Interagro website or follow them on social media.