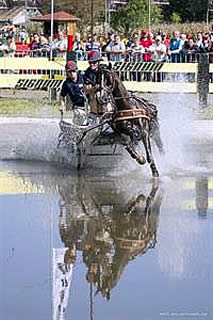 Izsak, Hungary – The United States had mixed fortunes on Saturday’s marathon and now stand 14th in team standings on a total of 301.7 at the 2014 FEI World Driving Championships for Singles. Jacob Arnold led the way for the U.S. as he proved unbeatable to win the marathon and climb into the top 15 individually.

In his World Championship debut, Arnold (Snow Camp, N.C.) drove Karen K. Chandor and John C. Merritt’s 10-year-old Morgan gelding, Hotspur’s Red Rowl, to fastest time through four of the eight obstacles on Saturday to finish the marathon on a score of 81.72. They will head into the cones phase in 13th place with an overall score of 136.95.

“I thought it (the marathon) was fantastic; it was quite a long marathon between the A and B sections but Rowley was really fit and we were all happy the horse’s fitness level,” said Arnold of his winning marathon performance. “He ran really well and didn’t ever give up.”

Donna Crookston (Saltsburg, Pa.) and her veteran 18-year-old Morgan gelding RG Cowboy’s Black Cadillac were the first Americans onto the marathon course and posted a score of 107.45 to finish the phase in 62nd place. The combination which are making their fourth World Championship appearance stand 59th overall on a score of 164.73.

Leslie Berndl and her 13-year-old KWPN gelding Uminco were forced to retire on the marathon when they had a problem with their equipment mid-course.