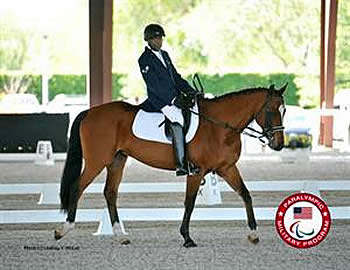 Wylie, TX – May 23, 2014 – On May 17, 2014, the first Wounded Warrior Introductional Seminar at North Texas Equestrian Center in Wylie, TX occurred. It was Armed Forces Day, a chance to honor all those who serve or have served. This seminar was an opportunity to reach out to veterans to educate them about a Paralympic sport whose roots are deeply connected to the military. In attendance at the event were veterans and their family members, USO volunteers, Para Dressage sponsors, as well as those interested in learning more about the discipline of Para Dressage.

Kai Handt, the U.S. Paralympic Equestrian Coach and Para-Equestrian Dressage Technical Advisor/Chef d’Equipe, showcased demonstrations by Air Force Veteran Derrick Perkins on horse NTEC Hans and Para-Dressage athlete Roxanne Trunnell on her own Touché. Both Perkins and Trunnell will be competing at the 2014 USEF Para-Equestrian Dressage National Championship in Gladstone, NJ June 2-5, 2014. Trunnell will also be competing at the Selection Trials (held concurrently with the National Championship) for a spot on the U.S. Para-Dressage Team for the 2014 Alltech FEI World Equestrian Games™.

Handt explained to those in attendance what is required to be a competitive Para Dressage rider and how veterans can qualify for the United States Olympic Committee and U.S. Department of Veterans Affairs Veteran Assistance Program for Para-Equestrian Dressage athletes. In addition to Handt’s informative presentation, Tina Wentz, FEI Classifier and USPEA Board member, explained the FEI Para Equestrian Classification system and how to get started in Para Dressage. They also went over the history of the Paralympic movement and the dressage sport in the military.

The unique relationship between the military and the Paralympic sport began with Sir Ludwig Guttmann, known as the Father of the Paralympics. He used wheelchair sport as a way to physically and psychologically rehabilitate soldiers who had suffered spinal cord injuries in WWII. The first competition in 1948 started small with one sport but caught the eye of the Olympic organizers. Twelve years later in 1960 the first Paralympics were held with 9 sports and twenty-one countries participating.

Dressage roots go as far back as Xenophon (430-355 BC) in Greece who developed a training method for complex military movements for their cavalry horses. Later in the late 18th century and early 19th century with the shift from heavy to light cavalry, dressage was developed to keep their horses fit, agile, and ready for battle.

These two movements came together in the 1970s with the development of Para Dressage and the inclusion of this discipline into the Paralympics in 1996 in Atlanta.

For anyone interested in future Wounded Warrior Informational Seminar, Handt will host a second seminar towards the end of 2014. Handt looks forward to introducing more veterans to a discipline whose roots are deeply embedded in the military.