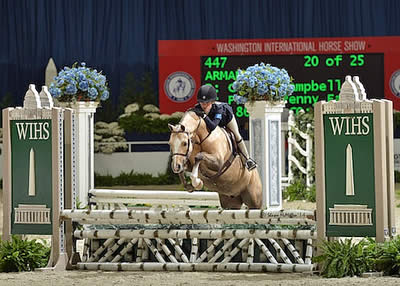 Armani, owned by Pretty Penny Farm and ridden by Claire Campbell, took Grand Champion Pony Hunter honors and was presented with The Miles River Moonglow Trophy donated by Scott Novick and Rustic Woods on Sunday. The WIHS Pony Equitation Finals were held in the afternoon with a win for Caroline Passarelli. The WIHS Regional Finals concluded the day with victories for Thea Bitar and Allison Kilroy.

A 10-year-old Welsh Pony gelding, Armani carried Campbell to her first-ever division championship in the Small Pony Hunter sponsored by Further Lane Farm. For the benchmark achievement, she was awarded The Stombock Saddlery Challenge Trophy donated by Stombock Saddlery in Memory of E. P. (Bud) Stombock.

“This was amazing and a big surprise,” said Campbell of her first divisional and grand champion title all in one day. “I have only been riding him for two months so this is a big deal.”

Campbell, who hails from Cochranville, PA, and Armani became fast friends just weeks ago before starring in the 11-year old rider’s second appearance at WIHS. “He’s really fun, a great jumper and he has a way better canter than any other pony,” she said.

Armani – a breeding stallion until he was seven – adds a charming sass to the small pony hunter division. “He’s sweet, but he wants to eat or bite everything. He has a lot of personality,” added Campbell.

That personality, while maybe problematic in the barn aisle, pays dividends in the show ring. Armani scored an 87 for Campbell to win the Stake and claim the Best Pony Hunter Stake Round Award. They also finished first on Saturday and were fourth under saddle. Arms full with prizes, Campbell returns home on Sunday promising Armani plenty of treats for his performances. She, on the other hand, has restful plans for herself. “I am going straight to bed,” she concluded with a smile.

Playing runner up to Campbell in the Small Pony Hunter Division was Sophie Gochman and Rico Suave owned by Ponies & Palms Show Stables. The pair won the Handy with an 86 for Reserve Champion, along with another second place over fences and third under saddle, but Gochman didn’t leave WIHS without a top tricolor. In the Medium Pony Hunters, she and Truly Noble, owned by Pegasus Show Stables, won the Stake to take Champion and were second over fences and third in the handy class. She was presented with The Shenandoah Sundowner Perpetual Trophy donated by Evan Coluccio and Ashmont Farms, Ltd.

Reserve Champion for the Medium Pony Hunters stayed in the family and was presented to Mimi Gochman after she and True Love owned by David Gochman were second in the Handy and also second and fourth over fences. Mimi Gochman also accepted the Potomac Trophy for High Score Junior Hunter Rider on a Pony sponsored by Riverview Farm, LLC for the second year in a row.

The Pegasus Stable Perpetual Trophy, donated by Ms. Fenwick Kollock, was claimed by Kirklen Petersen and All My Love owned by Dr. Betsee Parker after a Stake win clinched the Large Pony Hunter Championship. They were also second and third over fences.

Emma Kurtz of Hudson, OH and Storyteller, owned by Fair Play Farm, chased Petersen as Reserve Champion (they placed first, third, and fourth over fences and were fifth under saddle), but redemption came by way of The Captain V. S. Littauer Perpetual Trophy donated by Hugh J. B. Cassidy, III, Mrs. William Dillon and Miss Marion Lee. She accepted the trophy as Best Child Rider on a Pony, sponsored by Gotham North. Recognized for demonstrating the highest quality in horsemanship and sportsmanship combined with good appearance and courtesy, Kurtz won the award for the second time after also impressing the judges in 2012.

Storyteller is an 11-year-old German Sport Pony and no stranger to success at WIHS with Kurtz in the irons. The pair was Grand Champion Pony Hunter last year and stayed near the top of the results listings again this year. “He is so much fun,” said Kurtz. “You can get to any distance and he’ll jump amazing, so it’s nice to have that sense of security.”

“I was a little bit surprised, but it’s amazing. My trainers have a huge influence on me and how I ride,” said Kurtz after the final awards presentation. She rode under the direction of Amanda Lyerly this week and showed three ponies, as well as a Junior Hunter entry. She did it all while battling a cold throughout the week of her third WIHS campaign. “I’m exhausted,” she said, “but it was so worth it.”

Later on Sunday, the young riders competed in the WIHS Pony Equitation Finals with a win for 13-year-old Caroline Passarelli of High Falls, NY. Trained by Robin Greenwood, Passarelli rode Little Black Pearl to the high score of 87 over fences and came out on top after the ride-off under saddle. She was presented the winning Jane Marshall Dillon Memorial Perpetual Trophy, donated by the friends and students of Mrs. Jane Marshall Dillon. Taylor St. Jacques finished second, Ellie Ferrigno placed third, and Wylie Nelson earned the fourth place honors.

Passarelli has had 21-year-old Little Black Pearl for four years. The pair also won the Small Pony Hunter championship in Harrisburg last week and this was the rider’s last show on her and a special win to cap off their partnership.

“It has definitely been a journey from the bottom to the top,” Passarelli acknowledged. “We got her as just my first pony, never knowing anything like this would happen. I always do the medal finals and pony finals at Washington and I never get called back, but this year I really felt like I wanted to win it. It is my last time in the smalls, and I felt like I really had something to do it for. I went in there kind of just thinking to ride my best and think through the course and by my last jump, I knew that Pearl was perfect.”

“I wasn’t as nervous as the actual pony division. It is a completely separate part to me,” Passarelli said of the final. “You go in thinking that this is a new thing and start with a clean slate. Pearl was so good. I knew that it was my last class on her and that she was going to be perfect no matter what. She always goes into the ring wanting to do her best.”

“She has taught me everything about anything,” Passarelli recalled. “She wants a soft ride. She doesn’t like when you try to get your way and tell her what to do. She just wants to be your teacher. She will never do anything bad. She just likes when you can leave her alone and let her do the job.”

“It is amazing to win this. I definitely wanted to go out on a good note,” the rider stated. “The pony division went really well, she was awesome, but I just wanted to do that much better. I realized that I had to do my best, and it was amazing.”

Concluding the week of competition at the 2014 Washington International Horse Show were the Regional Hunter Championships. The WIHS Regional Pony Hunter Champion was Polka Dot Pal, ridden by Thea Bitar. Bitar (13), of McLain, VA, trains with Ian McCartney and this was her first time qualifying for the final at Verizon Center. Reserve champion was Blackberry and Grace Fulla.

To earn the championship, Bitar and Polka Dot Pal won the final class of the division on Sunday with the high score of 80 over fences. Kendall Youngblood and Pajama Party placed second with a score of 78. Sabrina Daniels and Stoneridge Show Stables’ Masquerade were third with a 76, and Olivia Carmouche and Mary Elizabeth Cordia’s Jumpin’ Jack Flash placed fourth with a score of 72.

Speaking about Polka Dot Pal, Bitar explained, “We went to try him on April 23, 2013, and when I first tried him I knew he would be perfect. He came home the next month, and I have been leasing him ever since. We renewed our lease last April, and we have him for two more months.”

“He is great. He is the sweetest little thing,” Bitar smiled. “You do need a lot of leg on him, but other than that, he is really easy. He goes in a D-ring bit most of the time. He is just a really happy pony. He never gets mad at the other horses, and he is just so much fun to ride.”

“Last weekend I was at Regionals, and I never thought we would qualify to show here,” Bitar admitted. “It is my first time and I guess it turned out pretty well. It is amazing to show here. I have always watched the show since I was little and thought how cool it would be to show here when I was so much older, and now I had this opportunity and I am so thankful.”

The WIHS Regional Hunter Horse Finals followed with a championship win for Inside Scoop and Allison Kilroy. They were awarded The Black, Starr and Frost Perpetual Trophy after winning the division’s final class at Verizon Center with a high score of 80. Hannah Showell and Unbelievable finished second with a score of 77, and Brittani Director placed third with a 73. Isabell Stettinius and Guest of Honor finished fourth and earned the division’s reserve championship overall.

Kilroy (17), of Severna Park, MD, trains with Amy and Streett Moore at McDonogh School. She leases Inside Scoop a.k.a. ‘Tank’ from the school and has ridden the horse for two and a half years.

“He is awesome. He is great to ride, and I am so lucky to have him,” Kilroy stated after her win. “This is actually my last show on him, so it was really special. He is so responsive, and he has the biggest heart of any horse I have ever ridden. He will do anything you ask him to do, so basically you just have to be assertive.”

Sunday was Kilroy’s first time competing in the Regional Final and a wonderful conclusion to her partnership with Inside Scoop. “It is amazing. It is the only show I ever really, really wanted to do, so it was such a great experience,” she smiled. “My round was really fun. I walked in and I just looked around a little bit because it is so cool to be in Verizon Center. Then I got my canter and got a good pace, and we just clocked around. It was a lot of fun.”

Kilroy is captain of the varsity riding team at McDonogh School and plans to stay involved in different activities. “I will probably switch to a different horse and do some local shows,” she noted. “Now I need to focus more on going to college and what’s the next step, so this is a great finale really. It was awesome.”

The Washington International Horse Show thanks their dedicated exhibitors, sponsors, staff, and spectators for supporting 56 years of show jumping in Washington D.C. The 2014 event was a remarkable one, and WIHS looks forward to welcoming everyone back in 2015. For full results and more information, please visit www.wihs.org.

About the Washington International Horse Show
An equestrian tradition since 1958, the Washington International Horse Show is the country’s premier metropolitan indoor horse show. Each October, more than 500 world-class horses and riders, including Olympic medalists, arrive in Washington for six days of exciting show jumping and hunter competition. Highlights include the $125,000 President’s Cup Grand Prix (a World Cup qualifier), the Puissance (high jump) and the WIHS Equitation Finals, an important goal for top American junior riders. Exciting equestrian exhibitions, boutique shopping and community activities, such as Kids’ Day and Breakfast with the Mounted Police, round out this family-friendly event. WIHS is an official USEF Heritage Competition and recognized as a Top 25 Horse Show by the North American Riders Group.