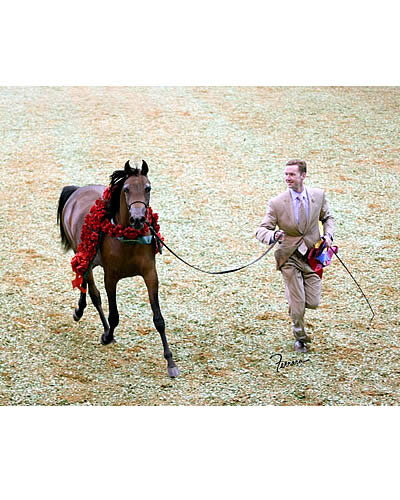 New York, NY – The world stage is set. The path has been laid out. The weather, with clear skies and enjoyable temperatures, is predicted to be perfect. The historical unveiling of the Arabian horse at New York City’s Rolex Central Park Horse Show is just days away, aligning with the arrival of Pope Francis to the ‘Big Apple’.

The transformation of the famous Central Park in Manhattan is in full swing as New York City prepares for a historic week. Arabian horses arrive in Central Park for the U.S. Open Arabians the opening night of the Rolex Central Park Horse Show on Wednesday, September 23. Beginning at 6 p.m., this unprecedented event will showcase the Arabian breed to the world.

These Halter horses are some of the world’s most beautiful, well conformed and magical horses of the breed. Their beauty, grace and quality have been dignified through Canadian and U.S. National Championship titles. Some have earned foreign titles from around the world, including honors from the World Arabian Horse Championship at the Salon du Cheval Paris, and the All Nations Cup in Aachen. Their handlers are professionals of the breed, claiming wins from these prestigious locations as well, and skillfully presenting these horses to their winning titles.

The Arabian Performance horses invited to the event include those from the disciplines of Western Pleasure, Country English Pleasure, Hunter Pleasure and Arabian Mounted Native Costume. These horses and their multi-National Champion riders bring to the limelight the diversity and athleticism of this amazing breed. These horses have earned National, Reserve National and Top Ten honors at the Canadian National and U.S. National Championship shows.

The Sport Horse discipline of the Arabian breed will be portrayed in the Sunday, September 27 exhibition, where invited horses claim both Open and National titles from the Arabian Sport Horse Nationals and Scottsdale Signature All-Arabian Horse Show. The exhibition is free to the public.

About the Arabian Horse Association