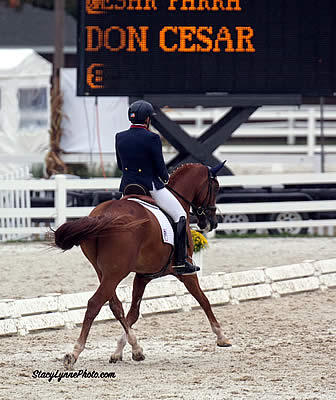 Devon, PA (October 11, 2016) – After a successful outing at the 2016 Markel/USEF Young and Developing Dressage Horse National Championships, Piaffe Performance Farm’s founder and owner Dr. Cesar Parra and his team had even greater results at the 41st annual Dressage at Devon horse show. The competition was held in Devon, Pennsylvania on September 27 – October 2, 2016. Piaffe Performance took a one-two finish in the FEI Young Horse Test for Six-Year-Olds division, where Parra captured two wins aboard his wife’s Don Cesar. Young Rider Rodrigo Encinas Fuentes and Dakhir were not far behind their coach, taking the reserve title.

Don Cesar, the Westphalian gelding owned by Marcela Ortiz Parra, was certainly on top of his game in the Dixon Oval. “Don Cesar finished up his six-year-old career in style with two wins at Devon,” said Parra, expressing pride for the talented horse that Don Cesar has blossomed into. Parra feels that success is something made from the efforts of many, and is grateful for his entire team that has worked hard all year at the Piaffe Performance facilities in Whitehouse Station, New Jersey, and Jupiter, Florida. “I’m thankful for my wife, Marcela Ortiz, who owns Don Cesar; for Jen Mandracia for all the love and care she gives to my horses; for Katie Riley for being my eyes on the ground; and for my whole team. They’re really the best. Devon was amazing like always – challenging weather but great times with great friends!”

Rodrigo Encinas Fuentes and Dakhir, a chestnut Hanoverian gelding owned by Nicoletta Ghribi of GK Horses, came in reserve behind Don Cesar. “I’m so grateful to the Ghribi family for all the support and trust I’ve received,” said Fuentes. “And of course I have to thank Cesar Parra for all the coaching and support. Without him, this would not be possible.”

In addition, Kathleen Riley, one of the founding members of Piaffe Performance, racked up notable ribbons with Kingston, a nine-year-old Hanoverian gelding. Riley and Kingston placed second in both Open Fourth Level classes, scoring as high as 70.27 percent. Riley also started the career of the future superstar Sir Beckmann in the USEF Four-Year-Old Test. “What talented stars they are!” said Riley of her two mounts. “The support of the Piaffe Performance Farm team, both at the show and at home, was amazing. I’m thankful to all of our friends who traveled from all over to support us!”

Piaffe Performance’s Merita Hagren and Don Perygnon, a 13-year-old Hanoverian gelding owned by Martin Sosnoff, were not to be outdone as they tackled Dressage at Devon, placing second and third in their classes. “One of my dreams came true when I rode the CDI U25 Grand Prix at Dressage at Devon. What a pleasure to ride this amazing horse, who was super the whole week,” Hagren said.

Additionally, Parra’s student and owner of Lucky Shoe Farm, Kathryn Mills, captured a second, third, and fourth in Open Fourth Level aboard her own Fabiano. “Riding in the Dixon Oval has been a dream of mine, and this Thursday it became real. I found myself a bit emotional during my final salute, realizing I was living a dream. As I have learned and as I teach: open your mind, listen to your trainer, and trust the program. And always push past the comfort zone. Take a risk, and love every ride,” Mills said.

Piaffe Performance’s meticulous training with high-performance dressage horses certainly paid off this year at Dressage at Devon. Parra is an Olympian and Pan American Games Dressage Team Gold Medalist, and he leads a team that strives to correctly judge the various stages of a horse’s mental and physical development in order to help each individual horse progress up the levels. Piaffe Performance produces horses and riders that have earned numerous prestigious accolades nationally and internationally.

To be a part of the Piaffe Performance winning tradition, visit www.piaffe-performance.com.