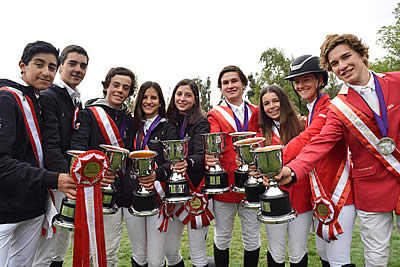 Brazil dominated once again when taking all the gold on offer, and more, at the FEI Jumping South American Championships for Young Riders, Juniors, Pre-Juniors and Children 2018 at San Carlos de Apoquindo in Las Condes, Chile. These Championships are a great test for the next generation of Jumping athletes in the region, and a total of 93 horse-and-rider partnerships from Argentina, Brazil, Bolivia, Chile, Costa Rica, Ecuador, Peru, and Venezuela competed at this year’s edition.

With medals on offer in seven categories, the Brazilian haul was little short of spectacular as they scooped 16 of the 21 sets on offer. However, there was plenty for the hosts to celebrate as they produced their best performance of the last four years when claiming both Pre-Junior and Junior team silver, while Argentina claimed bronze in the Children’s Team competition along with Young Riders Individual silver and bronze.

The Children’s Championship was one of the most exciting of the week, coming down to a three-way jump-off for individual silver and bronze. Brazil’s Eduardo Coelho Barbara (13) was already in gold medal position after a brilliant series of performances with Quatuor de Coutol before his compatriots Antonio Johannpeter Cirne Lima and Gabriela Munhoz Ongaratto Furlan took on Argentina’s Lucas Guevara in the race against the clock.

Guevara had enjoyed a brilliant run with CT Chamaco, winning the first qualifier, contributing to his country’s team bronze medal success, and then coming out on top in the Individual Final competition. It seemed the 14-year-old must be destined to take a podium placing, but he left a fence on the floor in the jump-off and had to settle for fourth place behind Munhoz Ongaratto Furlan in bronze and Johannpeter Cirne Lima in silver.

All eyes were on Philip Greenlees in the Pre-Junior Championship after his victory in the 2017 FEI Children’s International Classics Final in Beijing last December, but the 15-year-old had to settle for individual silver behind Maria Luiza da Silva Martha Vieira, while Lys Katherine Park Kang sealed another completely Brazilian podium.

“The work begins to be reflected in the results, which is very important. We have developed an arduous process and this medal reflects an advance because in this category we have won two consecutive bronzes.” — Joaquín Larraín (Coach, Team Chile)

Brazil’s Thales Gabriel de Lima Marino took double-gold in the Junior division to increase his South American medal tally to five. The 17-year-old who won team gold and individual bronze in Buenos Aires (ARG) last year was joined by the experienced trio of Laura Bosquirolli Tigre, Marcelo Gozzi, and Pedro Malucelli Egoroff to clinch the team honours yet again. However, the Chilean foursome of Carmen Novion, Magdalena Pena, and brothers Mateo and Raimundo Guarda was less than 10 points adrift in silver medal spot, while the Brazil Verde team claimed the bronze.

The host nation made a great start when Raimundo and Mateo finished first and third in the opening individual competition. But De Lima Marino was unstoppable on his way to individual glory, and when Gozzi seized silver and Felipe Pereira Teixeira took his second bronze medal of the tournament, it was another all-Brazilian party on the podium.

There were just five contenders for the Young Rider title and while gold went to Brazil, it was Argentina that took silver and bronze.

Argentina’s Richard Kierkegaard and Contiki won the opening round, but Brazil’s Victoria Junqueira Ribeiro de Mendonca (20) topped the next two competitions partnering the Holsteiner Una Bella to complete on a score of just 7.91 penalty points. That left her way ahead of Argentina’s Emilia Grimaldi in silver and Victoria Garcia Colombo in bronze when the final scores were counted.

This was Junqueira Ribeiro de Mendonca’s seventh South American Championship and brought her tally of gold to four. She scooped double-gold at the South Americans in Sao Paolo (BRA) in 2016 when she was also on the team that finished second in the FEI Junior Nations Cup at Wellington, Florida (USA).