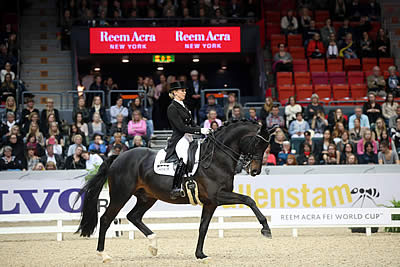 Gothenburg (SWE), 28 February 2015 – For the second year in a row, Germany’s Jessica von Bredow-Werndl and Unee BB reigned supreme at the Reem Acra FEI World Cup™ Western European League qualifier in Gothenburg, Sweden today. In 2014 the pair scored 81.350 to pin the host nation’s Patrik Kittel and Toy Story into runner-up spot. But in today’s second-last leg of the 2014/2015 series, Kittel had to settle for fourth behind The Netherlands’ Edward Gal and Glock’s Voice, while Germany ruled the roost with Isabell Werth filling second spot with El Santo behind her fellow-countrywoman in pole position.

Her score of 81.650 was not von Bredow-Werndl’s personal best this season, but she was more than happy with it. Gothenburg’s Scandinavium Arena has never been for the faint-hearted as it is a tight fit to get the Dressage arena inside it, and the acoustics create a wall of sound. Many of the riders were much happier with how their horses went today compared to yesterday’s Grand Prix in which von Bredow-Werndl also came out on top.

Following some late withdrawals, a total of 11 horse-and-rider combinations lined out at this Reem Acra qualifier and it was Jennie Larsson and the 11-year-old Zircoon Spring Flower who led the way at the halfway point with a mark of 72.600. Denmark’s Lone Bang Larsen was her nearest rival when posting 72.525 with the 16-year-old Fitou, whose ears were happily pricked throughout his test.

The final five really raised the game, however, led by Kittel and Toy Story who demonstrated clockwork piaffe and passage and a floating extended trot to earn 77.050 to take the lead. Isabell Werth and El Santo swept that aside, however, with a brilliant performance. The horse she calls “Ernie” was in flying form as he swung to his musical score, and few other riders could have contained the energy and enthusiasm this gelding showed today. Werth always throws her heart and soul into every test, and Ernie responded by giving her his all for a new leading mark of 79.900.

Gal’s Glock’s Voice showed some lovely work but found it hard to settle, and when this pair posted a mark of 78.100 it seemed very possible that Werth might come out on top. But, when Sweden’s Paulinda Friberg and di Lapponia T posted 76.925, von Bredow-Werndl sealed it when forging ahead with the biggest mark of the day.

The judges were in complete agreement about the performance of the elegant 14-year-old son of Gribaldi who has enjoyed a superb run of form over the winter months. A win at Kaposvar in Hungary, where they scored a hat-trick in the Grand Prix, Special and Freestyle, kick-started their march, and that was followed by runner-up spot on home ground at Stuttgart and third-place finishes at both Olympia in London (GBR) and in Amsterdam (NED).

“It’s super; I’m so happy. It’s hard to find the words. I want to go out and do it again!” said 29-year-old von Bredow-Werndl afterwards. “There were many good competitors here, and in the Grand Prix and Freestyle a lot depends on your communication with your horse and your daily relationship. My horse was completely with me. This was my best ride, we were really consistent, and when your horse is like that you can ask for a little more. He always wants to do a good job, and I’m also excited because I feel we have some more potential to improve!” she added.

Werth was also more than pleased with her result. “My horse was full of power today but we also had good collection and no mistakes. It was much better than yesterday, and now I feel really ready for Las Vegas!”

It seems she is on the way to the Reem Acra FEI World Cup™ Dressage 2014/2015 Final as she lies third on the Western European league leaderboard, and German strength is clearly evident as her colleague, Fabienne Lutkemeier, lies one place ahead of her while von Bredow-Werndl has a big lead with just one last leg left to run.

When asked if she had any reservations about taking Unee BB to the Reem Acra FEI World Cup™ Dressage 2014/2015 Final in Las Vegas in six weeks’ time, von Bredow-Werndl replied, “No, definitely not! I want to take him; he’s never flown before but he’s a very cool boy!” And as for her plans over the coming weeks, she explained, “He’s done enough for now; we will do a clinic for the national team; that will be a good warm-up for him because he likes to go somewhere once a month. He’s very eager to drive somewhere and he’s not happy when he’s left at home for long!” she explained.

Apparently Unee BB is an intrepid traveller. “He’s pretty unusual, I suppose,” she said with a laugh. “Travelling actually relaxes him! After Amsterdam (in January) he went in the lorry and didn’t get home until 2.30 in the morning, but he was so fresh when we arrived back that I could have ridden him all over again!” she said. “I’ve never been to Las Vegas, so I’m really excited and I know BB will like it because he’s a real showman!” she concluded.

11 horse-and-rider combinations from four countries – Denmark, Germany, Sweden and The Netherlands – lined out.

The winner was Germany’s Jessica von Bredow-Werndl with Unee BB, and it was a back-to-back double for the pair who also won the Reem Acra qualifier at this fixture 12 months ago.

The result has further boosted von Bredow-Werndl’s lead on the Western European League leaderboard. Following today’s competition, she has racked up a total of 74 points, leaving her a full 10 points clear of her nearest rival and fellow-countrywoman Fabienne Lutkemeier while Germany’s Isabell Werth, who was runner-up today with El Santo, lies third on the league table.

Edward Gal NED: “I was very happy with Voice; he was better than yesterday but next time I hope we get some 10s!”

Annette Fransen Iacobaeus, Ground Jury member: “We have seen some very good dressage today, especially in the second group; there was a big lift in the scores there. The horses were definitely more relaxed than they were yesterday.”