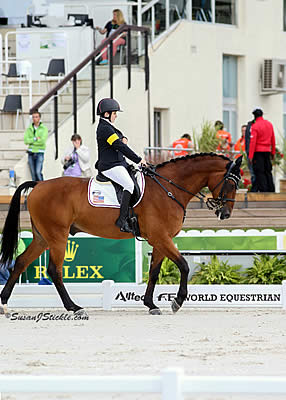 Lexington, KY – December 12, 2014 – Para-Equestrian Dressage Young Rider Sydney Collier has been named the 2014 Junior Equestrian of the Year by the United States Equestrian Federation (USEF). Collier, 17, of Ann Arbor, Mich. was selected for her accomplishments among many outstanding junior athletes. Collier will receive her award at the Pegasus Awards Dinner held Friday, January 16, at The Hyatt Regency Lexington in Lexington, Ky., during the 2015 USEF Annual Meeting. Collier will be awarded the Ruth O’Keefe Meredith Memorial Trophy as the 2014 Junior Equestrian of the Year.

Collier has made it her mission to, as she states, “take the ‘dis’ out of disabled.” At age seven, Sydney was diagnosed with Wyburn-Mason Syndrome after she began having blurry vision. Wyburn-Mason Syndrome is a rare, congenital disorder characterized by arteriovenous malformations in the central nervous system and retina. It affects only .14% of the world’s population and can cause brain hemorrhaging, stroke, paralysis, or death. She enjoys bringing awareness to the disabled community and the Paralympic Equestrian sport through public speaking, dedication, and her riding accomplishments.

In 2014 Collier earned a spot as a Grade Ib rider on the Alltech FEI World Equestrian Games U.S. Para-Dressage Team that competed in Normandy, France. She achieved strong scores on Victoria Dugan’s Willi Wesley, a 2000 Warmblood gelding. It was only four years prior at the 2010 World Equestrian Games in Kentucky where Collier met Paralympian Jonathan Wentz who introduced and then mentored her on the Paralympic sport. Through her positive attitude and determination Collier has garnered numerous accolades aboard horses Willi Wesley; NTEC Cuplee, owned by Patricia Mendenhall; and her current competition partner Wentworth, formally owned by Amy McIlwham. Collier rides with Paralympic Dressage coach Wes Dunham of Woodstock Stables in Millbrook, NY.

Between riding and maintaining her Honors student status at Skyline High School, Collier enjoys sharing her story and goals as a motivational speaker around the country. She not only speaks to groups and individuals in the equestrian world but she also enjoys speaks with groups with varied interests throughout the community including 4-H clubs.

Collier is an outstanding representative for the 2014 Junior Equestrian of the Year Award. Hope Hand, Paralympian and President of the United States Para-Equestrian Association, acknowledged, “This is an exciting achievement for Sydney. She has worked tirelessly as an athlete and student to achieve her goals. I have watched her grow as an individual over the past 5 years and her positive attitude and determination has been felt by everyone that has ever reached out to Sydney. She will humbly tell anyone that asks that she had the best mentor and advisor, the late Jonathan Wentz, who has guided her path to success. Jonathan was the driving force behind the Para-Dressage Junior and Young Rider Program, but it still takes a talented rider to carry on his mission to be the best in the world. I am so proud of Sydney.”

Hand continued, “On behalf of the Para-Equestrian discipline I would like to thank USEF for acknowledging this outstanding athlete.”

Collier is excited to look towards the future as she aims for the 2016 Paralympics in Rio de Janeiro. For more information about Sydney Collier, please visit www.SydsParaQuest.com.

For more information on the 2015 USEF Annual Meeting, visit https://www.usef.org/convention/Default.aspx.