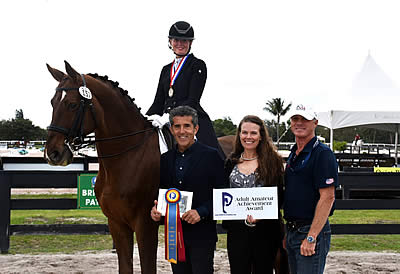 Wellington, FL (March 12, 2017) – As an enthusiastic supporter of the sport of dressage and an annual sponsor of the Adequan Global Dressage Festival, Piaffe Performance was delighted to honor dressage rider Ann Romney with the Piaffe Performance Adult Amateur Achievement Award at the Wellington, Florida show series. The award is presented to select adult amateurs who show a sincere and unyielding passion for the sport, and who have persisted to overcome obstacles in pursuit of their equestrian goals. The extraordinary Ann Romney, who juggles her role as a horsewoman, mother, grandmother, avid philanthropist, and former first lady of Massachusetts, accepted the award from Dr. Cesar Parra, owner of Piaffe Performance.

Romney said she didn’t think she would be taking Dalhems Diomedes into the show ring so soon, but she and her new horse have bonded remarkably quickly. “It was only our second time down the centerline together. He is just doing so well and seems to be really comfortable with me,” she enthused. “He is by Belissimo, and they are known for their really good brains, and he sure has one. He was the first horse I tried in Germany and I just fell in love with him.”

The story behind Romney’s path to the world of dressage is truly a remarkable one. After she was diagnosed with multiple sclerosis in 1998, Romney became determined not to let her battle with the debilitating disease keep her from achieving her goals of becoming a rider. Despite considerable physical difficulty, Romney fought her way into the saddle day after day, and eventually found a renewed sense of peace and replenishment in riding. Not surprisingly, working with horses continues to keep the disease at bay, and Romney maintains that working with horses was just the medicine she needed.

After riding with dressage Olympian and trainer Jan Ebeling in clinics, she was struck with the beauty of dressage and began learning from Ebeling as often as possible. Romney not only became a successful rider herself, but also became a sponsor of Ebeling’s international riding dreams. He rode on the U.S. dressage team at the 2012 Olympics in London on her mare, Rafalca.

Romney’s tenacious spirit and strong sense of fortitude stem from a deep and unwavering perspective of gratitude. “For people who have a need of nurturing – either emotionally or physically – that is always the best thing you can do, to get on the back of a horse. They bring you joy, they help you heal, and they give you such excitement – it’s just the sense of pure love that they emanate. As soon as I put my foot in the stirrup, all my cares dissolve. I always come back to this – it just nurtures me, it feeds my soul.”

In addition to maintaining an active riding career, Romney also finds time and energy to devote to her family and political life, having been an active participant in her husband’s U.S. presidential campaigns in 2008 and 2012, when he was the Republican Party nominee. Romney is also a committed philanthropist, championing The Ann Romney Center for Neurological Diseases at the Brigham and Women’s Hospital in Boston. The center of 250 scientists focuses on research into Alzheimer’s disease, multiple sclerosis, amyotrophic lateral sclerosis, Parkinson’s disease, and brain tumors.

Given her outstanding character and dedication to the equestrian life, Romney was a perfect fit for the Piaffe Performance Adult Amateur Achievement Award, which is presented at the Adequan Global Dressage Festival throughout the duration of the winter competition season. Dr. Cesar Parra, who presents riders like Romney with this honor, has represented the United States in the 2011 Pan American Games, where he helped secure a team gold medal. He was also on the U.S. team at the 2014 World Cup in Lyon, France. In addition to sponsoring the Wellington winter show season, Parra also campaigns his top horses throughout the competition. Piaffe Performance provides full-service training based on classical German methods at locations in Jupiter, Florida and Whitehouse Station, New Jersey. To learn more about Parra, his Piaffe Performance team, training, and lessons, visit www.Piaffe-Performance.com or find them on Facebook @PiaffePerformance.