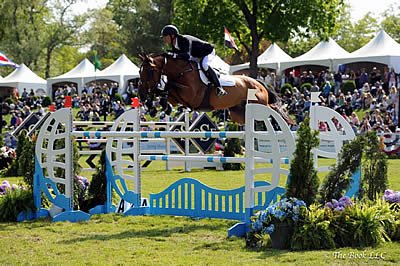 Andrew Ramsay. Photo by The Book.

“It has been awhile, probably two or three years, since I’ve won a grand prix. It is a great feeling to do it again. It has been fantastic to have Doodle here on the field and be good enough today to get it done. It’s been a very good weekend.” ~Andrew Ramsay

After a second-place finish in the feature grand prix during the first week of the Old Salem Farm Spring Horse Shows, Ramsay and Cocq a Doodle, owned by The Doodle Group, moved up for a victory in the $130,000 Empire State Grand Prix, presented by The Kincade Group, in a three-horse jump-off. The only double-clear effort of the day belonged to Ramsay, who stopped the clock at 45.50 seconds over a jump-off track built by 2017 Longines FEI World Cup Final course designer Alan Wade (IRL).

Earlier in the day on the Grand Prix Field, Madison Goetzmann, 17, of Skeanatles, NY, won the $15,000 High Junior/Amateur-Owner Jumper Classic, presented by Beval Saddlery, riding her own Prestigious. They bested the eight horses that advanced to the jump-off with a clear round over the short course in 31.172 seconds.

“He’s an incredible horse. He has amazing scope, but we have been taking our time. Each week, things just keep getting better and better, and we’ve developed a better partnership.” ~ Madison Goetzmann