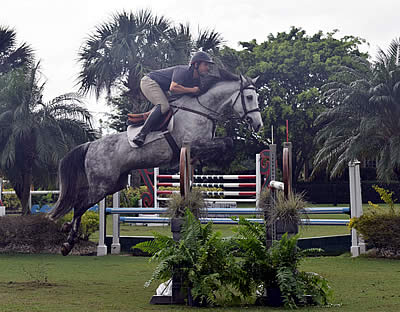 Andrew Kocher and Coconut (Photos courtesy of The Ridge at Wellington)

Wellington, Florida (January 10, 2016) – An unusually rainy and misty day greeted competitors, owners, and spectators at Schulyer Riley’s Wolfstone Farm, but did not dampen spirits as they lined up to show and watch the first installment of the 2016 Turf Tour series presented by The Ridge at Wellington. The season’s inaugural competition welcomed a substantial turnout of professional, junior, and amateur riders to its adjacent rings, with the grass and sand arenas running concurrently and hosting everything from Low Schooling Jumpers to various top-level jumper classes on the derby field.

Andrew Kocher, a newcomer to the turf tour, put in efficient rides aboard a group of three horses and won impressively with double clear rounds aboard Coconut, an entry of Eagle Valley Partners, LLC. Katie Dinan aboard Grant Road Partners’ Checkpoint U, Dougie Douglas and Galan S finished second, third and fourth. Kocher followed Ms. Dinan’s performances placing 5th and 6th with his own Red Lady and Eagle Valley’s Ciana. The derby field course, designed Nick Granat, presented riders with a modest yet technical and straightforward challenge that stressed accuracy and timing.

The courses for the sand arena followed in the same vein, presenting the opportunity for horses and riders to gain experience and skill. The Low Schooling Jumper divisions saw Daniella McCormick and Anne Veeder victorious with their mounts, Nash and VDL Viktor, while Joseph Comunale and BTW took the win in the Medium Schooling Jumper and the Junior Amateur Classic. Anne Veeder and Carbonari 3 ruled supreme in the series’ largest class of the day, the $2,000 Children’s Adult Jumper, and the second Children’s Adult Jumper class saw Kristen Landino and Wirco Polo victorious.

With the goal of developing young horses and advancing riders, the Turf Tour is a 13-week show series and a unique addition to Wellington’s growing winter circuit, offering riders top-tier competition, over $400,000 in prize money, and an unparalleled atmosphere. The ‘show when you like,’ open-ended schedule offers convenience and a more distilled competitive environment, without sacrificing the challenge and competition found at nationally recognized shows. Organized by Olympic show jumper Nona Garson, George D’Ambrosio, and Craig Bergman, the vision that inspired the tour’s conception was bringing back the old world flair to jumper classes by staging competitions on springy, natural turf surfaces away from the chaotic intensity of other show grounds. Running every Wednesday and Friday during the winter season, with the exception of two Saturdays (February 6 and March 19) to accommodate for The Ridge at Wellington’s National and International Hunter Derbies, the Turf Tour offers classes ranging from junior and amateur jumpers to the Grand Prix, and in a variety of venues reminiscent of the large European tours.

The Turf Tour’s competitive, utopian show atmosphere is matched only by its hospitality, which includes free breakfast and lunch for all competitors, spectators, and owners, riders’ lounges, competitor parties, and an equine shuttle organized through Meadowbrook Horse Transport. For only $75, riders can schedule pick up and drop off at the Turf Tour’s weekly venue, as well as a trip back to their farm anywhere in Wellington after their rides. By removing the hassle of transport and offering numerous perks in addition to prize money, competition, and a unique atmosphere, the Turf Tour is setting a new standard for show experiences in Wellington.

Turf Tour Week 2 will be held at the prestigious International Polo Club on January 13 and 15, 2016.

The Ridge will also host a USEF Rated Equitation show each Tuesday during season, and its Palm Beach Series hunter and equitation show occurs one weekend each month, at The Ridge at Wellington. The equitation competitions are envisioned as a way for riders to qualify for the national championship finals in a relaxed, quiet environment. February 5th and 18th, 2016, The Ridge at Wellington will play host to two USEF/USHJA National and International Hunter Derbies, which offer over $40,000 in prize money and showcase the athletic prowess of performance hunters over natural obstacles.

For a full prize list and show schedule, visit Shows at The Ridge at Wellington.