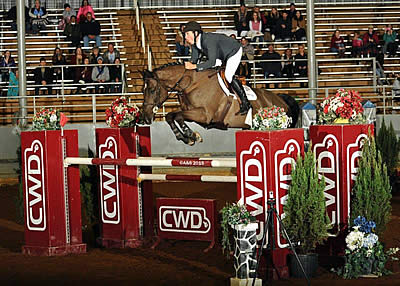 Andy Kocher and Land Rebel sail over the CWD oxer on their way to the win Saturday night.

Andrew Kocher of Lake St. Louis, Missouri has had a very successful run during Week II of the Gulf Coast Winter Classics in Pensacola. After scoring a trifecta win in Friday’s $5,000 HorseFlight Open Welcome class, he went on to win the $25,000 Nutrena Grand Prix with his own Land Rebel under the lights in the covered arena on Saturday night.

“The course looked easy enough when we walked it, but with the lights and the tight turns, the jumps just came right up on you and it turned out to be a very tough course,” commented Kocher, “and the time allowed was pretty snug too,” he added.

The first round time allowed was set at 83 seconds. It looked as if there was not going to be a jump off as horse and rider team after another finished their first rounds with jump faults and time faults.

It was not until the eighth to go, Mary Lisa Leffler of Brookville, Maryland and Rolling Acres’ Carlot went clean to the crowd’s delight in a time of 77.749 seconds. It looked as if she may win the class, until Kocher entered the ring with Land Rebel as the final rider in the first round. The pair went clean in a time of 79.312 seconds to the crowd’s delight. There would be a jump off!

Leffler and Carlot were first to go and turned in a fault-free performance in a time of 41.069 seconds, well within the 48 seconds time allowed. Kocher followed with Land Rebel and rode the jump off round lightning fast in a time of 38.841 seconds, locking in the win.

“Land Rebel is a horse I bought in the Czech Republic about six or seven weeks ago,” said Kocher. “He’s won some big classes already in his show career. I showed him in Wellington two weeks ago and he was eighth in the grand prix there,” he said. “He’s a good, solid, experienced horse and fast as hell. All you have to do is just kick him and run,” he laughed.

What are Kocher’s future plans? “Well, I’m going to finish up the last week here in Pensacola and I will be at the last half of Gulfport. My goal for the winter is to win the $77,000 Grand Prix,” he said. “I have some new horsepower supplied to me by Julie Dodd, Shannon Hicks, Helen Gilbert and Karen Cobb,” he continued. “My old reliable Le Conte is out with an injury, but I have some new bullets that I think can get the job done,” he said. “I have a great group of owners with me and we’re having a great time,” he said.

For more information on this class, visit horseshowsonline.com.

Kocher Grabs a Trifecta Win in the $5,000 HorseFlight Open Welcome

“The Welcome was a nice, soft course that did a great job getting us ready for the grand prix,” commented Kocher.