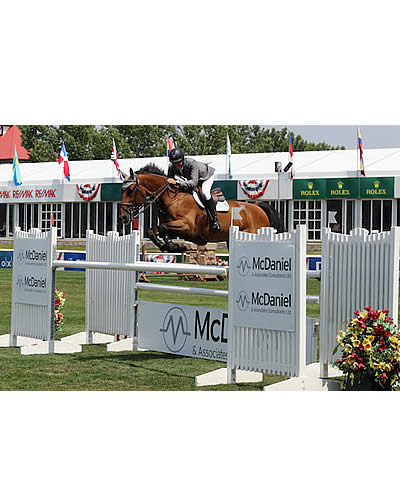 Calgary, AB, Canada – July 11, 2015 – Venezuela’s Andres Rodriguez is finishing the 2015 Spruce Meadows Summer Series just the way he started. The rider won two days in a row to begin the ‘National’ Tournament in June with Fifty Fifty 111 and Darlon van de Groenhove, respectively. He won again with Fifty Fifty 111 the first day of the ‘North American’ Tournament last week, and Saturday of the ‘Pan American’ Tournament, he dominated the competition with two wins in one day aboard two different horses.

The ‘Pan American’ Tournament, presented by Rolex, hosted two competitions in the Meadows on the Green Saturday. Rodriguez began the day with a win in the $34,000 Friends of the Meadows Cup 1.45m aboard SF Ariantha, and continued to victory in the highlight $34,000 McDaniel & Associates Cup 1.50m riding Verdi. The ‘Pan American’ Tournament concludes on Sunday, July 12, featuring the $400,000 Pan American Cup, presented by Rolex.

Course designer Guilherme Jorge (BRA) saw 32 entries in the $34,000 McDaniel & Associates Cup, but a tight time allowed caused problems for many of the riders and only two were able to complete the course without fault. Seventh in the order, Rodriguez and Verdi were the first pair to jump clear. It looked like they could win as the competition neared its end with no other clear rounds, but last to go Emanuel Andrade (VEN) and Bon Jovi made it a jump-off.

“For a while I thought I was going to win with the only clear round. All the horses kept coming and having rails, and there was the last to go and still no clears,” Rodriguez detailed. “I had my helmet on, but I was already thinking that I may have won and then Emanuel went clear. I ran and got the horse ready and warmed up. Our plan for the jump-off was to go fast. Not crazy fast, but fast, and let Emanuel finish the competition. If he was able to catch that time and be clear, then he would have won, but we put everything on him and luck turned out on our side.”

Rodriguez and the 13-year-old Warmblood gelding (Andiamo x Libero H) cleared the short course in 33.82 seconds and set the challenge. Andrade and Bon Jovi were fast, but a rail came down and the rider chose to retire on course.

Commenting on his win, Rodriguez smiled, “It is amazing. The way this horse jumped today was really great. A big field like this one is perfect for him. He has an amazing, huge step. His step is so enormous that sometimes it gets me in trouble because it is so big that you don’t know if you are on the earlier stride or the one you want to be. He is hard to maneuver in a smaller ring, but this grass field with big, wide fences suits him perfectly.”

“I am excited about this horse,” Rodriguez continued. “We have him going in a really good way, so I hope we can plan some big things for him. We did him in the Global Champions Tour in Miami and had a fence down in the grand prix, but he was really good. We are hoping to bring him back to that level and compete him in more 5* grand prix.”

Earlier in the day, Rodriguez and SF Ariantha won the $34,000 Friends of the Meadows 1.45m competition in a seven-horse jump-off out of 44 starters. Brianne Goutal (USA) and Remarkable Farm’s Ballade van het Indihof began the jump-off with a fast clear round in 29.63 seconds. Last to go, Rodriguez and SF Ariantha were just faster in 29.41 seconds for the win. François Mathy (BEL) and Elvis van de Vrunte placed third in 29.75 seconds.

“I have to say thank you to Jennifer and Mike, who first trusted me with the ride on the mare. Since the first day I rode her, I was really excited. Every single jump she tries her best; even little fences, she always tried so hard,” Rodriguez stated. “Then Robert and Sofi purchased the mare last week. This was their first week owning the mare and she was clear in every competition she did, so they are pretty happy too.”

“We have worked hard for owners, and now for them to be giving us back the chance to have horses of this caliber is really amazing,” Rodriguez noted. “I think this mare is the best horse I have had. I have been close to winning a competition with her a few times and it has not happened, so for her to win on her last day here is really amazing.”

Rodriguez was close to winning Friday’s 1.45m competition as well, but had some bad luck in the jump-off. Even in Saturday’s jump-off, he needed a little luck when SF Ariantha almost fell on course.

“This is a funny sport,” Rodriguez remarked. “Yesterday, I had the time on two horses in the jump-off and I had the last fence down, and today I thought I rode the last fence worse than I did yesterday and it stayed up. That is just the luck factor in our sport and that is the way it is. I don’t think I had the perfect stride to the last fence today; I was a bit close, but you need a little bit of luck to win.”

Commenting on Ariantha’s slip in the jump-off, Rodriguez detailed, “I didn’t know what happened. She was very fast the first three fences and then she landed from that vertical. It wasn’t a slip to one side; she was pretty much on her belly on the ground with four legs open. I was trying to pick up the canter again and at that point, I really have such high hopes for this mare that I wasn’t sure if I should pull up or keep going. As soon as she picked up the canter again, she was three strides in front of the double. It was amazing for her to pick up like that and jump the double the way she did. That was unbelievable.”

Rodriguez has high hopes for SF Ariantha and plans to compete in Vancouver in August before making a plan for the rest of her year. “I really want to take my time with her; I think she is a big time horse,” he concluded.

With five wins on four different horses in the summer’s international competition, Rodriguez has his sights set on Sunday’s $400,000 Pan American Cup, presented by Rolex, to conclude the 2015 Spruce Meadows Summer Series. He will jump another horse, Caballito. Then he is off to represent Venezuela at the Pan American Games in Toronto.