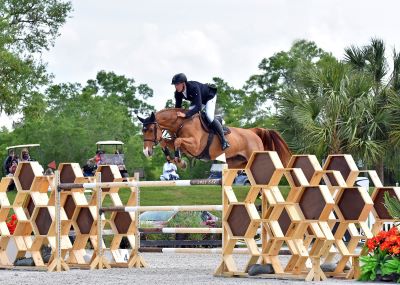 It was a perfect day at HITS Ocala for the seventh Great American $1 Million Grand Prix, where riders from near and far took their shot at the coveted title and the winner’s share of $350,000. The sun was shining as previous Million Winners, first time Million riders, Grand Prix and Olympic Veterans, and newcomers were welcomed under the HITS arch into the Grand Prix Stadium for the richest class in the world so far in 2020 and 2021. Not only was this the seventh Great American Million, but it was also the 22nd $1 Million Grand Prix hosted by HITS.

The course designed by Mr. Bernardo Cabral of Lisbon, Portugal challenged riders to be accurate and earn their shot at the top honors. “This class was a varied group of riders. Some have been in Ocala all circuit, and some came from other parts of the state. It was a big field, so I thought it was a hard class to put together,” said Cabral. “I didn’t make it overly big but it was technical and I thought asked a lot of questions to the riders, but also left an easy way out for the horses if there was a mistake by the pilot.” The first round course consisted of fourteen fences and included several delicate verticals throughout the track, often with wide oxers right before or after, making riders plan their adjustments quickly. The triple bar to the triple combination was a unique effort early in the course, and the last line of a wide oxer away from the ingate to the final vertical foiled many a rider’s plan of making it to the jump-off. Eight riders jumped clean to move on to the jump-off course which featured several new elements as well as parts from the first round course.

Andre Thieme is officially the most decorated HITS Million Winner as Sunday marked his fourth HITS Million title, this time taking home the blue ribbon aboard his own CHAKARIA. “I think everybody can tell by now that this class [HITS $1 Million Grand Prix] means something to me! It’s my goal every year and while I’m not giving away other classes, I definitely don’t put as much effort toward some of the other classes,” said Thieme. “I try to really produce my horses for this class every single time. I try to be sure that everything on the day of this class goes perfect because this is the class that I really want to win each year.”

Thieme’s first HITS Million win came aboard ARAGON ROUET in the 2011 Saugerties Million, followed by his first win in the Great American Million aboard CONTANGA 3 in 2014, and the third being back in Saugerties with CONTHENDRIX in 2017. “Now that I’ve won this class four times, it’s just unbelievable to me,” Thieme exclaimed. “I would have never thought that it is possible, but I have a superstar horse for the first time in my life and it’s just so much easier with that kind of a horse.”

Thieme has been riding CHAKARIA for the past year-and-a-half and said that it didn’t take him long to realize how amazing the chestnut mare is. “I couldn’t believe my luck that for the first time in my life, I was a little bit quicker than someone else buying the horse. She is fast, sound, a fighter, careful, and scopey – I don’t know how to start and how to end; she’s just an amazing horse.”

As Thieme continued talking about the day, he discussed the course, saying, “When I first walked it, I thought that it was probably going to be a little bit too small. I was expecting something bigger for the number of horses entered, to not have 15 clear rounds. Bernardo [Cabral] explained it to me and I realized that the course was a touch trickier than I thought.” Going 41st in the order, Thieme was the fifth to go clean in the first round, giving him an advantage of returning later in the in the jump-off.  Several early riders had rails or other mistakes, so Thieme knew a clear round was most important, but a fast time would put the pressure on the final three. Thieme jumped clear in 34.393 to claim the lead. “It worked for my horse because she is really careful,” said Thieme. “I have to thank Tom and HITS once more because without him we wouldn’t have a class like this and I and many of the other riders really appreciate it.”