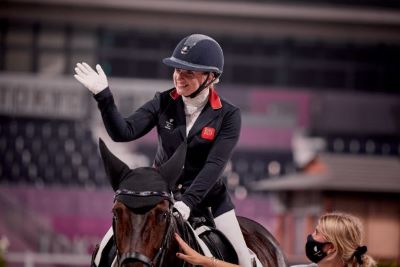 With day one of the Para Dressage Team competition complete, the Tokyo 2020 medal winners remain impossible to call.

On current standings any combination of The Netherlands, Great Britain, USA, Belgium, and Denmark could take a place on the podium, and in any order.

All Team riders from Canada and Singapore have now competed, leaving Canada at the top of the leader board with a combined score of 211.699, ahead of Singapore with 200.792.

There are three athletes per team. Each Grade competes separately in its own Team Test, with each horse and athlete combination performing a series of pre-determined movements, which differ by Grade.  The combined results of each of the teams’ three athletes will determine the overall score and the team with the most points wins gold.

The day started well for Sir Lee Pearson (GBR) who won the Grade II Team Test on Breezer with 77.636%.

“I am over the moon with that lovely score. Breezer doesn’t like the Olympic arena and he was quite frightened in there. He’s a sensitive soul, but I’m so proud of him because I held his hand and he trusted me and I could be sitting here with a different story.

“He’s sensitive, but that sensitivity, when it’s on side, makes him fabulous.”

Pepo Puch (AUT) came second in the Test on Sailor’s Blue with 74.909%, while Katrine Kristensen (DEN) earned her team a valuable 72.515% on Welldone Dallas.

Roxanne throws down an 80 plus challenge

Roxanne Trunnell (USA) laid down the day’s only 80 plus score in the Grade I Team Test, riding Dolton to 80.321%. The noise of fire engines attending a nearby incident added pressure during her Test, but the pair rose above it to perform calmly and brilliantly.

Second place went to Sara Morganti (ITA) with an impressive 79.286% on Royal Delight, ahead of Michael Murphy (IRL) on Cleverboy, with 75.179%. That last result was especially pleasing for the young Irish rider, coming the day after he suffered an equipment failure in the Grade I Individual Test which left him in last place.

“He felt brilliant again,” Roxanne said after her Test. “He was a little tense, but we worked through it.”

Referring to the disturbance outside, she added, “That’s what made him tense up a little. I don’t think you can prepare. It just happens and you go with it.

“It means a lot to ride for the USA after such a weird year. Everyone is going to remember this Paralympics.”

Tobias Thorning Jorgensen (DEN) gave his country a real shot at a medal with a stunning 79.559% in the Grade III Team Test, on Jolene Hill.

“It was intense today,” said Tobias. “I’ve done something today, so I have a little bit of pain, so that was just Jolene carrying me around. I’m very grateful to her, she went even better than yesterday.

“This is a great start and I hope we can be a medal contender or at least be there, so if anyone makes a mistake, we can take it. I just love the Team competition because we go down here as a family and be there for each other.”

How things stand, and what happens next

Based on the scores at this halfway point in the competition, the gold medal is still up for grabs between the USA, Great Britain, and The Netherlands. However, strong performances from the two Danish riders, and with Belgium’s two remaining riders still to go, mean those two countries could still snatch a medal.

It will all come down to the Grade IV and V Tests. As the Grade V athletes go first, all eyes will be on Kate Shoemaker (USA) who will determine her team’s final score, as well as on Frank Hosmar (NED), who will want to build on his teammate Rixt’s performance.

But in a dramatic finish, Grade IV Individual Test gold medallist Sanne Voets (NED) could find herself riding to seal victory for her country. As the last of the likely winners to ride, she will have a good idea of the score needed to get the gold. Adding to the pressure is her chance of becoming only the third Para Dressage athlete to secure the triple, triple of consecutive European, World, and Paralympic gold medals.

Sanne insists that she doesn’t play the numbers game, but her fans and followers of Para Dressage will know that this will be one of the highest stakes ride she will ever perform.