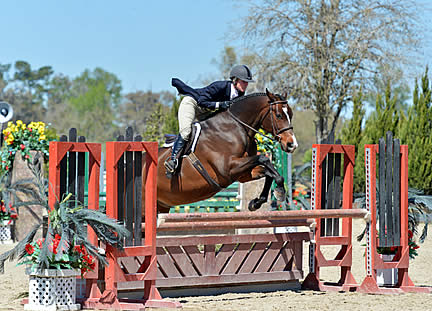 OCALA, FL (March 16, 2013) – The final $1,500 HITS Hunter Prix took the stage on Saturday at HITS Ocala with blue skies and sunshine. Amy Zettler of Aldie, Virginia and her own Glad Rags picked up their third HITS Hunter Prix victory this season as they set their sights on the HITS $250,000 Hunter Prix Final.

“I’ve had an amazing circuit,” said Zettler, who finished in second place last year in the inaugural HITS $250,000 Hunter Prix Final in Saugerties, New York. “Primo [Glad Rags] is a great horse and we’ve had a wonderful time here this winter. HITS does a great job making the hunter prix classes very special, and I feel like everything was spectacular this whole circuit.”

Twenty-six horse-and-rider combinations competed over a course designed by Tim Hott, as twelve returned for the second round. Zettler posted a pair of 83s in the two-round classic for the win.

Second place belonged to Kevin Foster of Brookeville, Maryland and Ufonia P, owned by Paulexi, LLC. Foster had a first round score of 79 and the top second round score of 86 to claim the red ribbon.

“This has been one of the most successful seasons our barn has ever had,” said wife Patty Foster of Rolling Acres Farm. The Rolling Acres family is sharing a lot this season, as they present, for the first time ever, the Rolling Acres Farm Laura Pickett Perpetual Trophy, awarded to the top scoring Junior Hunter rider of the entire circuit. The award will be presented during the Antares Parade of Champions on Sunday.  “It’s great when you’re successful at a show, but it’s even more special when it’s something you can share with your entire family.”

The third place ribbon was awarded to Margot Peroni and Susan Cowie’s Magnolia. Peroni, of Califon, New Jersey, rides with Redfield Farm under the tutelage of Emil Spadone. The duo posted a first-round score of 84.5 and a second round score of 79.

As HITS Ocala comes to an end, Zettler and Woodhall Farm prepare for another exciting show season that will include HITS Culpeper. She and Glad Rags will head north with the Antares Grand Circuit Championship in the Adult Hunter 36-45 division.

“I’m so proud of my horse and I have to thank my trainers Peter Foley and Dale Crittenberger,” she said. “I have really made a lot of new friends and that has been the best part of it all. I’m really lucky to spend good times with great people at a great horse show.”

HITS Equitation Championship
The HITS Equitation Championship took place on Saturday in the Grand Prix Ring as the top junior riders of the circuit showed of their equitation one final time. A two-round class, the top twelve returned for the second round with an additional test of the top four to determine the winner. Rising star Hunter Holloway of Topeka, Kansas captured the victory with Blige, owned by Hays Investment Corp.

Holloway has had a fantastic circuit as one of the premier junior riders in the country. The daughter of grand prix veteran Brandie Holloway, she has made a name for herself this season with several strong finishes in grand prix, as well as in the junior hunters. She also earned the 13th overall ribbon in Saturday’s $50,000 East Meets West Hunter Challenge just a few hours after her equitation win.