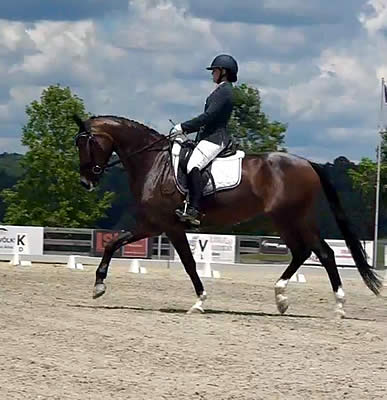 Fairburn, GA (August 5, 2016) – Displaying the rhythm and impulsion indicative of an exceptional young dressage horse and worthy of comparison to The Knack’s rock ’n’ roll classic “My Sherona,” the elegant bay KWPN mare Gerona strutted to victory in both days of showing at Chattahoochee Hills Dressage, held July 16 & 17, 2016. With Amy Speck-Kern of Excel Dressage in the saddle, Gerona (Tango x Odessa x Junior STV) was awarded a 7.900 to top the FEI 5-Year-Old test on Sunday. Combined with the pair’s past score of 7.840 for a total of 7.870, the average landed them in the top 15 on the 2016 Markel/USEF 5-Year-Old Young Horse Championship Ranking List and secured them an invitation to compete against the nation’s top young horses at Lamplight Equestrian Center.

Despite being only recently imported to the United States, Gerona has proven her mettle and poise in the dressage arena. In the mare’s debut performance on US soil, Gerona and Speck-Kern scored a 7.840, securing their first qualifying score towards the Markel/USEF Young Horse National Dressage Championships. Speck-Kern, who operates Excel Dressage out of Loxahatchee, Florida, has had less than a month’s worth of preparation following the mare’s arrival and quarantine in the States in May, and was impressed with the young horse’s composure despite long hours in the trailer and a completely new environment at qualifying shows.

“Gerona showed us once again her talent and intelligence,” said Speck-Kern. “The judges were very complimentary of her gaits, especially her trot, which they awarded an 8.6. In the short time I’ve been riding her she has truly blown us away with her composure and brilliance in the arena, and I’m thrilled to have qualified her for the Young Horse Championships!”

Gerona is owned by the Hoog family, and Katie Hoog, who has been purchasing horses from The Netherlands since 2007, scouted the Ster PROK predicated mare on a buying excursion to Holland in March of 2016. In a pressure crunch of time and travel, the decision to purchase the mare was made from only a video and quick lunging session, but that was enough to seal the deal. As a 3-year-old, Gerona won her mare testing with an 82.5%.

“Her three gaits, excellent conformation, and beauty are what originally caught our attention as a potential FEI prospect,” said Hoog. “With the added bonuses of intelligence and character she has everything she needs to be a real contender in the Young Horse divisions. Amy has done a fantastic job getting her qualified in a limited timeframe, and we are looking forward to seeing her in the arena at Lamplight.”

Excel Dressage was founded by Speck-Kern in 2010 and offers training, showing, and sales of top caliber dressage horses. After beginning her career with Olympic Bronze Medalist Michael Poulin and “S” Judge Sharon Poulin, Speck-Kern’s naturally quiet and effective riding style and training method drew a strong international client base of competitive amateurs. Excel Dressage imports a select number of exceptional sales and show prospects each year, and Speck-Kern was also recently accepted into the prestigious USEF “r” program. With her sights set on eventually obtaining international judge accreditation and international show ring success, she offers a unique training viewpoint as both a rider and judge.