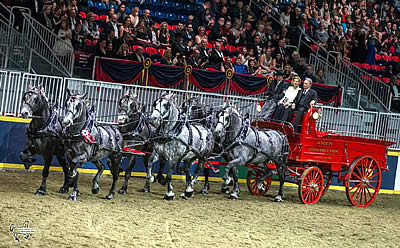 Toronto, Ontario – The horses of Ames Percheron Farm, driven by Travis Shaw, won the $25,000 Royal Six-Horse Draft Championship on Saturday night, November 12, at the Royal Horse Show, held as part of the 94th Royal Agricultural Winter Fair in Toronto, ON.

The $25,000 Royal Six-Horse Draft Championship, presented by Ames Construction, was the culmination of five days of six-horse, breed-specific competition at The Royal with the top three Belgian, Clydesdale, and Percheron hitches invited back for Saturday night’s championship in the Ricoh Coliseum.

“We’re always aiming to be at the top but it takes so little, one little mistake, to drop you from first to fourth,” said Shaw.  “It’s tough.”

Despite the stiff competition, Shaw and the team at Ames Percheron Farm are no strangers to success at the Royal Horse Show, having previously claimed the championship title in 2013 and 2014 before finishing as the reserve champions in 2015.

“There’s no other show that we ever see that’s as prestigious as The Royal,” Shaw said.  “The crowd, the atmosphere, the arena, the lighting – it’s all a first-class show.”

Rounding out the top three in Saturday night’s championship were the winners of the $2,500 Percheron Six-Horse Hitch, the All-Star Farms hitch, driven by Ross Honsberger for Doyle Dingman and Nick Wagner.

“This is a real big win for us,” said Honsberger following his victory driving an all-mares team in the Percheron Six-Horse Hitch.  “We actually took some of the fall off with these girls.  They’d been off for a good seven or eight weeks.  This is their first show back after a break off; we didn’t know what we’d have but they performed well.  We were really ecstatic.”

All-Star Farms first competed at the Royal Horse Show in 2010, and the prestigious indoor horse show has been a favourite ever since.

“We look forward to it every year,” said Honsberger.  “It’s so unique compared to everything we do.  To have the other breeds here and the lights, the cameras, the action, the pomp and circumstance – that’s the Royal!  That’s what you think of when you think of it.  It’s just a classy, classy event.  We always look forward to it every year, and it’s usually our last show of the year, so it’s kind of the grand finale.”

For more information on the Royal Horse Show, the marquee event of The Royal Agricultural Winter Fair, visit royalfair.org/horse-show.  Next year’s Royal Horse Show will be held from November 3 to 11, 2017.