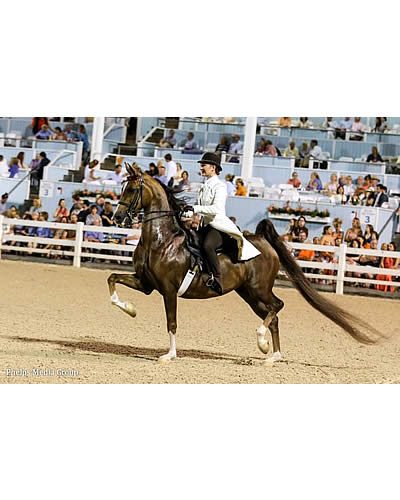 Ashlee Wheaton was not sure what results to expect at her second Devon Horse Show. She and her American Saddlebred mare, CH Extremely Fortunut, had a fantastic first year showing together in 2014, when they were champions at Devon and went on to earn the title of World’s Champion of Champions Junior Exhibitor Country Pleasure. In 2015, the pair moved up into the Adult division, taking on a new set of competitors.

“I am so excited,” the 19-year-old said after collecting her tricolor. “It means that my hard work has paid off.”

To compete at Devon, Wheaton flew in from her home in Nova Scotia. Her horse, nicknamed Chalupa, is based in New Hampshire with Cater Stables, and she travels back and forth to train and prepare for shows. She feels Devon is a special experience.

“I love it,” she said. “I think it’s so cool at night under the lights. We don’t really get to do that very often.”

Maureen Quackenbush is competing at her first Devon Horse Show, and she will be taking home great memories and a tricolor ribbon. She and C B Party Girl clinched the Hackney/Harness Pony Pleasure Driving Championship Saturday afternoon.

“I’m so excited,” Quackenbush said. “It’s fantastic. It means a lot. This is the home of the Hackney; the show is all about the Hackney. To come here and actually win something is great.”

She added, “Everyone said you’ve got to do it at least once in your lifetime. I’m not getting any younger, so that’s why I’m here!”

Quackenbush and C B Party Girl, a 7-year-old mare, have been competing together for the past year. After a string of good results, she thought Devon might be worth the trip from her home in upstate New York, and the decision paid off.

“We did some winning last year, so we figured we’d come down here and try it!” she said.