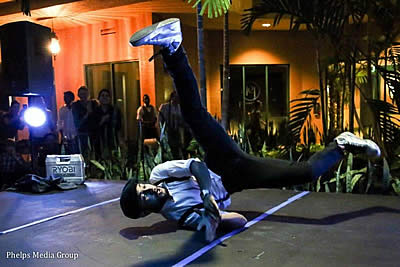 Wellington, FL – December 18, 2015 – American Equestrians Got Talent, an entertaining fundraiser to benefit USEF High Performance Programs that showcases equestrians’ non-horsey talents, is excited to announce that all weekly auditions during the 2016 season have been moved to White Horse Fashion Cuisine at the Palm Beach International Equestrian Center. Every audition is free and open to the public, but seating is limited.

The first audition is Wednesday, January 13. Sign up now by emailing Robert Dover at Rdover2@aol.com! Auditions are open to the entire equestrian community, including riders, grooms and supporters of all disciplines. Auditions will be held at White Horse Fashion Cuisine for nine weeks, with $1,000 in prize money being offered to each week’s winner. There is no cost to attend auditions.

On March 20, the top performers from each week will each take center stage in the international arena at the Adequan® Global Dressage Festival and give their all in hopes of walking away with the title of America’s Most Talented Equestrian and the grand prize, valued at no less than $10,000.

Spearheaded by U.S. Dressage Team Chef d’Equipe Robert Dover, American Equestrians Got Talent will serve as a fundraiser to benefit the USEF Development Programs which identify and develop talented horses and athletes that will help deliver medals at future Olympic, Paralympic and World Equestrian Games. It is a great way to support Team USA – be sure to come out and cheer on your favorite performer! After putting on a successful event last year, Dover is excited for American Equestrians Got Talent to take it to the next level in 2016.

American Equestrians Got Talent, a fundraiser to benefit USEF High Performance Programs through the USET Foundation, returns to Wellington, Florida for its second year in 2016. Contestants participate in weekly auditions to earn their place in the season finale. Celebrity judges at each audition will critique the performances, and the audience’s applause will determine who moves forward to the finale and who goes back to the barn.

Prize: $1,000 will be awarded to the top performer at each audition.

Participants: Auditions are open to the entire equestrian community, including riders, grooms and others involved in any discipline. Please sign up in advance by contacting Robert Dover (Rdover2@aol.com), who will set up practice times and work with contestants the day and night of the auditions. Walk-ins may be accepted as time permits.

Prize: The winner, who will be named America’s Most Talented Equestrian, will receive a grand prize of $10,000 sponsored by Robert Dover, chef d’equipe of the U.S. Dressage Team, and Robert Ross, P.A., luxury equestrian realtor for Keller Williams.