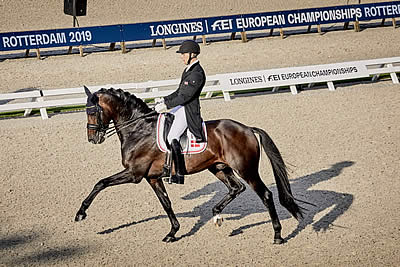 Hot on the heels of a super summer of sport, culminating in the edge-of-the-seat excitement of the FEI European Championships in Rotterdam (NED) in August, the best horse-and-rider combinations from all across Western Europe are ready to rock-n-roll when the new-season FEI Dressage World Cup™ series kicks off in Herning, Denmark.

This first leg of the 2019/2020 league has attracted a stellar cast of 21 riders from 10 countries including the host nation’s Daniel Bachmann Andersen who will partner the one-eyed wonder-stallion Blue Hors Zack with which he is ranked sixth in the world, and with which he pinned Germany’s Helen Langehanenberg and Damsey into runner-up spot at this opening fixture 12 months ago.

The Dane also concluded last season’s qualifying rounds with victory in ’s-Hertogenbosch (NED) in March where Langehanenberg again had to settle for second place. But the German star turned the tables at the 2019 finale in Gothenburg (SWE) in April when she made it to the third step of the podium on the last day while her Danish rival just missed out when finishing fourth. The game of cat-and-mouse between these two super-talents and their horses will resume when the Grand Prix gets underway in Herning on Saturday, 19 October, at 13.00 local time.

The strong Danish contingent will also include Agnete Kirk Thinggaard and JoJo Az who helped claim European team silver two years ago in Gothenburg (SWE) along with Anna Kasprazak riding Rock Star, and Cathrine Dufour who is ranked seventh in the world with her top ride, Atterupgaards Cassidy. This time out Dufour will partner the considerably younger Bohemian, who helped secure second place in the hotly contested Dressage Nations Cup at Aachen (GER) in July when competing alongside Kirk Thinggaard and Bachmann Andersen.

However, the German presence will be a powerful one, as Langehanenberg, series champion in 2013 and runner-up in 2012 and 2014 with the great Damon Hill, will be backed up by compatriots Frederic Wandres and Benjamin Werndl who both made their mark on last season’s Western European League. Werndl steered Daily Mirror to victory in Salzburg (AUT) in December and Wandres followed suit with the aptly named Duke of Britain at Olympia in London (GBR) a few weeks later where he pinned home heroine, Charlotte Dujardin riding Hawtins Delicato, into runner-up spot.

Dujardin of course is one of the biggest draws in this sport, having set so many world records scores during her spectacular partnership with the now retired and still much-loved Valegro with whom she claimed the FEI Dressage World Cup™ title in 2014 and again the following year. The British rider has stated her aim to qualify for the 2020 Final and may line out at the second leg of the new series in Lyon (FRA) next month, and at her hugely popular home fixture in London Olympia in December so that should send a ripple of excitement through her huge fan-base.

It’s going to be full-on from the outset this season, with Stuttgart (GER) hosting the third leg, also in November, and Madrid (ESP), Salzburg (AUT), London Olympia (GBR), and Mechelen (BEL) all taking place in December.

Round eight in Amsterdam (NED) will get the new year off to a great start and then it will be on to Neumunster (GER) and Gothenburg (SWE) in February before ’s-Hertogenbosch (NED) brings this qualifying series to a close in March. After that it will be all eyes on the Final which returns to Las Vegas (USA) for the fifth time.

The very first FEI Dressage World Cup™ champion was a Dane, Anne-Grethe Jensen, who stormed to victory with Marzog in ’s-Hertogenbosch (NED) in 1986, and some years later she reflected on the effect of that success which led to a rapid expansion of the sport in her home country. Dujardin’s charming partnership with Valegro has also inspired more than one new generation of young female athletes right across the globe, and more recently Judy Reynolds has done the same.

The Irish rider and her brilliant little horse Vancouver K finished fourth at the FEI Dressage World Cup™ Final in Omaha (USA) in 2017 and have been smashing national records ever since. And this summer they led the very first Irish team in the history of the sport to Olympic qualification with a series of extraordinary results at the European Championships. The knock-on effect has been increased membership of the national governing body and a huge rise in entries for the recent National Championships at which over 700 tests were ridden over three days.

Reynolds has also confirmed that she will compete in the Western European League over the coming months as she prepares for Tokyo 2020, but everyone knows there’s really only one rider they all have to beat. And that is Germany’s Isabell Werth.

It’s 27 years now since this legendary lady won her first FEI Dressage World Cup™ title in Gothenburg (SWE) riding Fabienne. And, with a hat-trick of wins with her 2016 Olympic team gold-medal-winning mare Weihegold over the last three seasons, and sweeping all before her at the 2018 FEI World Equestrian Games™ and again at this year’s FEI European Championships with her other mare Bella Rose, she’s like an unstoppable train.

As defending champion, she just has to compete twice with whichever horse she would like to take to the 2020 Final. But for all the other Western European League contenders the road to Las Vegas begins, and good results will be key to their journey every step of the way.