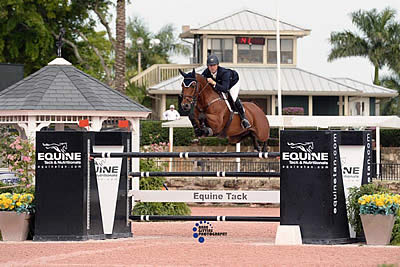 Among 45 pairs, Granato remained victorious with his tidy turns in the course set by Anthony D’Ambrosio (USA). “I was really happy with him today. He felt super. He is a naturally quick horse and with going first, I wanted to be prompt and efficient and just let him carry his own motor and now have to ask for a whole lot extra since we have another big class this week,” he commented.

“It was a pretty nice course and it was smooth. I was more focused on rideability early in the first turn, because [from fence] one to two was a pretty big gallop across the ring, and in one of the tight turnbacks from the second jump back to the liverpool oxer. I just wanted to keep him pretty focused there so that he had a tidy turn and was rideable. He did that really well – he galloped to the vertical and then really sat down and rolled back well. From there, I just wanted to keep it smooth and stay tidy to be as efficient as we could,” stated Granato.

Granato relayed his plans for the upcoming week, saying, “Today was our warm-up for the Grand Prix on Saturday. Tomorrow will be a relaxing day for him. He’s a naturally hot-blooded horse, so tomorrow we’ll do a long, relaxing flat to just get his focus and his rideability back and hopefully he comes out Saturday ready to jump the same way.”

In the single-round, faults-converted competition boasting 16 of the division’s best young riders to test the course designed by Anthony D’Ambrosio (USA), Cohen and Carmen were able to save time on every turn to take the win. She explained, “Carmen is awesome at the speed – she’s kind of just kick and turn, and she’s always right there for me. I went late in the order and since it was faults converted, I thought I would go in and just give it my best shot and it worked out well. There were a few turns where I was really kicking on and she really helped me, so I couldn’t be happier.”

Cohen and her “horse of a lifetime” have competed together from the High Juniors to international Grand Prix classes. She elaborated: “I cannot say enough good things about her. It’s just been an amazing year and a half with her. I started with her in the High Juniors and she’s taken me up to the U25. I’ve gotten to do some 2* and 3* with her and she really is the most perfect horse you could ask for at home. She’s a little bit quirky,” Cohen continued. “She looks around the ring and is a bit of a mare at home, but she would never put a foot wrong at the show and has the biggest heart.”

Cohen’s victory on Thursday kicked off the USEF U25 National Show Jumping Championship week at Palm Beach International Equestrian Center (PBIEC), which will continue through Sunday, December 2. Cohen praised the U25 division for its importance to up-and-coming riders, stating, “The U25 circuit has prepared me really well for international classes. Last season was my first year competing on the U25 circuit and it was definitely a learning experience. It was nice because in Europe the classes are so big and competitive with lots of professionals, so this division has done amazing things for me in terms of bridging the gap from the High Juniors to the bigger FEI Grand Prix competitions,” she elaborated. “I predict throughout the week it’ll keep getting bigger and more technical. I think this division is great and I look forward to doing it and learning from it for a few more years.”

For more information on PBIEC and the ESP Holiday Series, please visit www.pbiec.com.