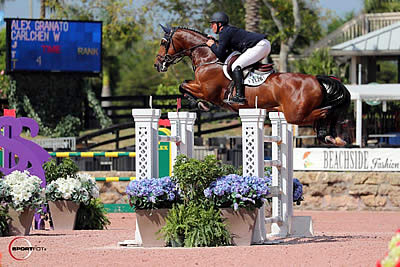 There were 67 entries in Thursday’s feature class, and the format was a speed course designed by Ken Krome (USA). Granato and Carlchen W, a ten-year-old Mecklenberg gelding by Chacco-Blue x Continue, sped over the obstacles and stopped the timers in 65.03 seconds.

They finished just ahead of Olympic gold medalist Beezie Madden (USA) and Abigail Wexner’s Con Taggio, who finished in 65.81 seconds. Third place went to Richie Moloney (IRL) and Ypaja Yando, owned by Equinimity LLC, who had a time of 65.93 seconds.

Peter Pletcher, aboard Kennedy, owned by Blanche Strunk, was crowned the Conformation Hunter champion on Thursday afternoon with a top scoring total of 39 points. The duo was fourth in the model, fourth in the under saddle, and first, first, and second over fences. Victoria Colvin claimed the reserve with 26 points and a third in the model, first in the under saddle, and a second, third, fourth, and fourth over fences.