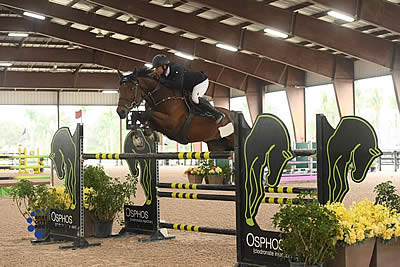 Wellington, FL – November 5, 2019 – The final Hunter and Jumper competition to be hosted at Equestrian Village took place this past weekend with the ESP Fall Finale. Although rain kept this past Sunday’s feature class off of the Derby Field, Alberto Michan of Israel and El Pacho, owned by Pablo Mejia, were still thrilled to conquer the $25,000 Osphos® Grand Prix in the Van Kampen Covered Arena with a 39.58-second jump-off round. Finishing only two seconds behind with 41.036 seconds on the clock was Theo Genn of Lebanon, OH riding Taylor Blackman’s Boucanier, while Maria Schaub of Wellington, FL claimed the third-place position aboard Gotico Di Ca’ San Giorgio, owned by Evergate Stable, LLC, after a 44.182-second jump-off.

Santiago Lambre of Mexico rode his Doloris to a fourth-place finish in 40.565 seconds with four faults, while Diego Perez Bilbao of Spain and Victoria Vargas D’agostino’s Orso Del Terriccio completed round one in 79.661 seconds to claim fifth place. A total of 20 competitors challenged the first track, designed by Andrew Christiansen, with just five returning for a second trip. With a two-second lead, Michan explained where he thinks he shaved off those final seconds: “I was able to see the riders that went before me, and Theo [Genn] did a fast track, but I saw at the end [of the course] that those final 8 strides that we all talked about when walking the course weren’t that forward for him. So I thought there I had a chance to do the seven [strides] and I think that’s where I got the shorter time.”

While the plan was to host the Grand Prix on the Derby Field, Michan expressed his satisfaction that it was held in the Van Kampen covered arena: “I think they were very right to move it under the covered with all the rain we got today. The grass is beautiful here, but it was also very warm on Friday for the Stake so we riders, horses, etc. were happy to be inside and stay cooler today. I think the horses were happier and seemed to jump better too.”

Friday’s $10,000 Osphos® 1.40m Open Stake was bested by Gianni Gabrielli of Argentina and Maidensway’s Chaco 34 after the put in a final time of 37.915 seconds. Crossing through the timers in 38.502 seconds to claim second place was Johan Kachelhoffer of South Africa with his entry Carlos 691, while Joao Eduardo Ferreira De Carvalho of Brazil finished in third with a 43.425 aboard Karina Rocha Mello’s Lamina Van’t Gelutt Z.