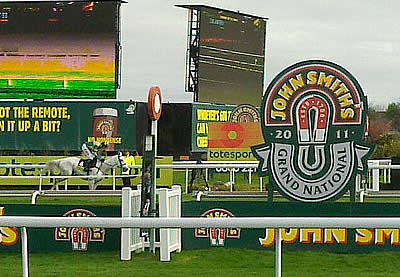 When the Cheltenham Festival is over in the United Kingdom, horse racing fans across the world start to look towards World’s most famous, exciting and prestigious Grand National. Held on the historic Aintree course in Liverpool, this is a huge test of jumping ability and stamina, where only the best and most courageous horse comes through.

This National Hunt horse race will be held on Saturday, April 6, 2019 at Aintree Racecourse in Liverpool, England. Look to the Grand National guide for an indispensable aid to finding the winner of the World’s most famous and prestigious horse race.

The “National” offers a different kind of horse-racing experience with a pack of horses competing along a 4-mile course studded with 30 fences. This is a handicap race where horses wear different weights. The National Hunt horse race’s Steeplechase style is popular in France and the United Kingdom. A Steeplechase is a distance horse race in which competitors are required to jump diverse fence and ditch obstacles.

Modern usage of the term “steeplechase” differs between countries. In Ireland and the United Kingdom, it refers only to races run over large, fixed obstacles, in contrast to “hurdle” races where the obstacles are much smaller. The collective term “jump racing” or “National Hunt racing” is used when referring to steeplechases and hurdle races collectively. Elsewhere in the world, “steeplechase” is used to refer to any race that involves jumping obstacles.

The drama is spread out over 3 days while spectators gather in the grandstands and all-inclusive restaurants to watch the winning horse pass through the finish line after jumping the last obstacle along the Steeplechase. The Grand Opening Day is on Thursday 4th and Ladies’ Day is on Friday 5th, before Saturday’s Grand National Day.

This steeplechase race course has much larger fences than those found on conventional National Hunt tracks. Many of these, particularly Becher’s Brook, The Chair, and the Canal Turn, have become famous and, combined with the distance of the event, create what has been called “the ultimate test of horse and rider.”

The Grand National site contains everything you need to know about this magical race. The National will be held at the Aintree Racecourse which is predicted to host over 150,000 racegoers across the 3 days. An estimated worldwide audience of over 600 million people will tune in to watch on TV.

The National is the most valuable jump race in Europe that captures the imagination of millions of watchers around the world. It has an ability to consistently produce thrilling finishes and heart-warming stories.

The National is popular among many people who do not normally watch or bet on horse racing at other times of the year. Read the Aintree Grand National 2019 Betting companion article for details and tips on betting.